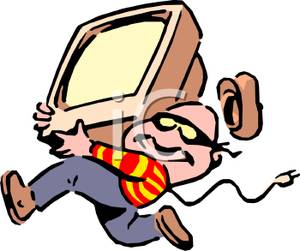 Police reports indicate that one incident was in Chicago and the other was in Los Angeles.

Like a thief in the night, both the Hawks and the Mavericks stole their Game 1s and home court advantage away from the Bulls and Lakers, respectively. Time for the rewind:

Through three qtrs, the Hawks and Bulls ended up pretty even. Sure, each team made a run, but the other team pulled themselves back in. But a cold start by the Bulls in the 4th qtr along with some 3pt makes by Joe Johnson and Jamal Crawford put the Hawks in the lead by 12. Some timely defensive stuffs at the rim by the Hawks and a nasty Jamal Crawford stepback 3pt held off the Bulls and stunned and silenced the Bulls crowd. (We're happy for you, Crawford!)

To make things worse, after the Bulls gave up committing intentional fouls, and with only 3 seconds left in the game, Derrick Rose injured his ankle stepping on Jamal Crawford's foot (or simply took a bad step behind Crawford's foot). It didn't look bad enough to knock him out of the next game, but it could swing the series in the Hawks favor, since the Bulls offense seems to be built around Derrick Rose.

Down in LA, it looked like Mavericks were giving us a lesson on how to fall apart to close a half. Jason Terry reached and fouled Lamar Odom on a half court heave, giving up 3 FTs. Add on a Dirk Nowitzki T from a frustration elbow and that's 4 free points to extend the Lakers' run. Things got worse after the half when the Lakers stole the ball 3 times and scored 7 pts to push their lead to 16.

But Rick Carlisle cleaned things up. He yanked DeShawn Stevenson, picked up the pace, had the players play more aggressively on the steals/turnovers, and the Mavericks pulled back to within 2 to recover from their collapse. Late in the game, with the Lakers up 1, Pau Gasol committed a idiotic foul on Dirk Nowitzki on an inbounds catch and gave Dirk 2 free FTs and the lead. Kobe's heroic 3pt attempt came up empty, and the Mavericks stole Game 1.

It's just Game 1, and it's a bit too early to spell that five letter U-word, but I would sure love to finish spelling that word for both series. Rewind done, it's fast forward time! 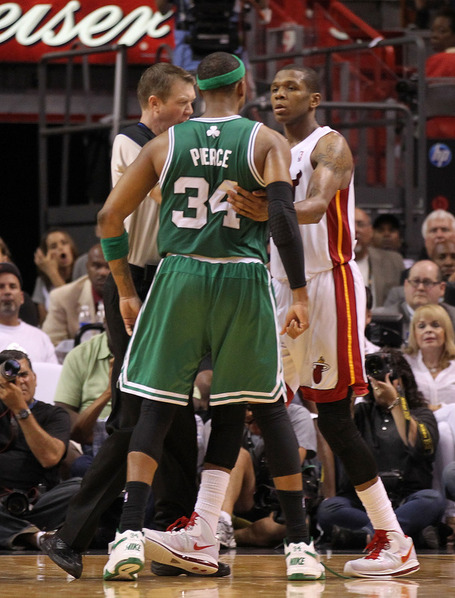 So much for an intense game between the Mavericks and the Lakers last night. If you want intensity, this is the series to watch. The Celtics have always been a "tough" team ever since KG, RA, and PP got together. The Heat know they have to play equally tough in order to stand up to and beat the Celtics. We'll see if the Celtics Game 1 loss was a matter of the long break from beating the Knicks quickly, or if the Heat are for real. 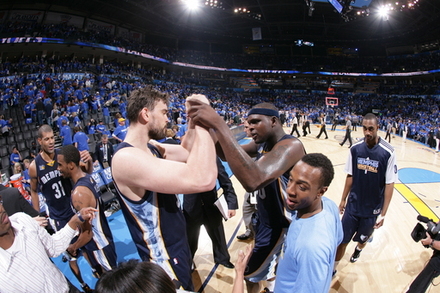 Not only was beating the Spurs in Round 1 an amazing win, it was just as amazing that the Grizzlies got themselves ready quickly to face and beat the Thunder 2 days later in a noon game. Now we'll see if the Grizzlies are really better than the Thunder, or if the Thunder were simply slow to wake up from their hiatus. Plus we'll see if Russel Westbrook improves his IQ between games.