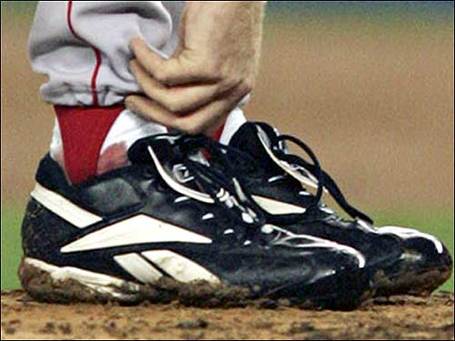 The NBA's two most celebrated franchises can draw inspiration from this red sock.

Paging Curt Schilling ca. 10/18/04. Yesterday Rajon Rondo seemed to, and it worked out rather well for himself and the Celtics. Despite minutes earlier having had his left elbow bent into a configuration that would make a Chinese gymnast blanch, Rondo came sprinting out of the trainer's room — fleet feet and right arm intact — to help the Celtics get back in their EC semifinal showdown v. Miami with a convincing 97-81 win. Meanwhile, on today's docket, the downtrodden Lakers look to follow in the (bloody) footsteps of Schilling's '04 Red Sox by taking the first step towards becoming the first team in NBA playoff history to climb out of a 0-3 hole. Some more thoughts on 0-3 holes and the other two series after the jump.

Well, let's just say they're not quite as deep as "no one in NBA history has ever climbed out of one" might make them seem. Perhaps the biggest reason no team has ever climbed out of one is that it's extremely rare for the better team, or even equally matched team, to dig an 0-3 hole in the first place. The vast majority of the 98 NBA teams that heretofore have found themselves in 0-3 holes have been the weaker of the two teams. Mathematically speaking, if we assume that the Lakers and Mavs are roughly evenly matched — and that's being extremely generous to the Mavs — the odds of the Lakers winning four in a row are really not that long: .5 x .5 x .5 x .5 = 6.25%. That's roughly the odds of Stephen Curry missing a free throw. Not great, but hardly unthinkable. And that's before considering that (a) the Lakers are probably the better team; and (b) with each loss, the pressure on the Mavs will start to mount exponentially. Which is to say, if the odds of Lakers' winning tonight are something like 50%, the odds of them winning Game 5 shoot up dramatically; and the odds of them winning a hypothetical Game 7 at Staples after tying the series have to be damn near 100%.

Really, as rough as this predicament seems for the Lakers, it's nowhere as tall as the task the Red Sox were looking at in '04. Then we were talking about the MF New York Yankees — Jeter and A-Rod in their prime leading an offensive juggernaut that had just scored 19 runs at Fenway; and, in the event of trouble, Mariano Rivera, the greatest closer in baseball history, hanging out cool-as-a-cucumber in the bullpen. Here ... well, Atma Bro put it well yesterday: "If there's any team that can come back from that it's Phil Jackson, Kobe Bryant, and crew. If there's any team that can choke away this lead it's Dirk Nowitzki's Mavs." Before Game 4 of the '04 ALCS, Kevin Millar uttered the now-famous words "don't let us win tonight." Words for the Mavericks to ponder deeply. One l'il win by the Lakeshow and the Mavs may start to feel an extremely unpleasant tightening around the collars.

On the "other two" series.

Man, Z-Bo, Mike Conley, and Lionel Hollins' Grizzlies continue to impress. Down 16 in the third last night, they pulled out a 101-93 OT win (and 2-1 series lead) by summoning the same grit, fire and defensive intensity they've been able to summon for nine playoff games now. It's getting way past the point where you can call this a fluke. They've officially become the poster boys for all middling playoff bubble teams who seemed doomed to perpetual mediocrity. You may still need a franchise player to go all the way, but with a second or third-tier star and a whole lot of defensive intensity, board-crashing and teamwork, you can make some real noise in the playoffs. Warriors (et al.), take note.

I still think the Thunder have what it takes to go all the way this year, but for that to happen Scott Brooks really needs to get in Russell Westbrook's face and let him know who the best player on the team is. Westbrook's strengths are as an athletic playmaker, passer, rebounder, and general havoc-wreaker. How he got it into his head that he should be taking as many field goal attempts as Kevin Durant, one of the great offensive forces in NBA history, is a mystery. A couple more nights where Westbrook clangs 15-20 shots and turns it over 5-10 times and the Thunder may find themselves sitting at home and wondering how such a young, stacked team fell to the Memphis freaking Grizzlies.

As for Chicago and Atlanta ... zzz, wake me when this one's over, will you? There's a great moment in George Carlin's Seven Words You Can't Say on TV, where, after rattling off the magnificent seven, he pauses slightly and says "...and t*ts shouldn't even be on the list." Well, the Hawks are sort of the "t*ts" of the remaining eight playoff teams. According to Pythagoras, they were a below .500 team this year (i.e. they allowed more points than they scored). Clearly they deserve props for taking down the Magic in the first round, but this year's Magic were a poorly constructed and predictable mess. JJ, JSmooth and Horford remain a decent-enough threesome; but when your go-to guy in crunch situations is Jamal Crawford, a player who makes Monta Ellis look multi-dimensional, your chances of a deep playoff run are pretty slim. (I suspect Rajon Rondo with both elbows bent in the wrong direction could still grab more rebounds, drop more dimes, and play better D than Jamal Crawford).

The Bulls for their part are a very solid team, but it's hard to tell exactly how solid when they've drawn such a cakewalk of a duo of opponents. Atlanta and Indiana may be the two worst teams in this year's playoffs. Needless to say, the cakewalking will end abruptly when they draw the winner of Celtics/Heat in the ECF. Tom Thibodeau may want to consider asking the Spurs (or Lakers or Celtics?) to come to the Bulls' practices as sparring partners.