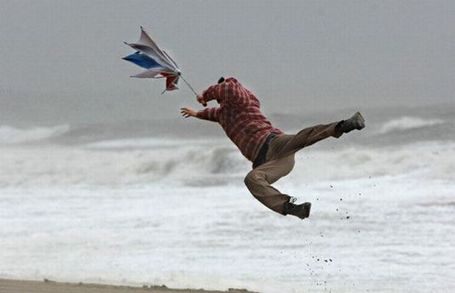 The Lakers were swept off their feet and out to sea by tropical storm "PejaJET".

The first sprinkles came with Jason Terry hitting a 3 from the corner with hand in his face. Up 7. Then a small gust of wind came as Peja Stojakovic (of all people) stole a pass and finished a fast break. Up 9. Several possessions later, the storm unleashed its full force. Terry hit a 3, up 10. A few plays later, Terry hit another 3. Up 12. And he hit ANOTHER 3, up 15! Then Terry drove and kicked to Peja in the corner, and HE rained in a 3. Up 18! And we were just halfway through the 2nd qtr! Add on another pair of Peja/Terry 3s near the end of the half, and the Lakers retreated into halftime soaked in a 24pt deficit.

When you don't keep yourself in alert mode during a storm, bad things can happen, like this in the 3rd qtr:

Guess what followed this play: Back to back Terry 3s, Laker's deficit back to 25. That's an 8pt swing from a lapse of concentration. Another pair of Peja/Terry 3s near the end of the 3rd qtr nullified anything the Lakers tried and pushed the Mavericks lead to 29, sweeping the Lakers out to sea.

Charles Barkley is the only guy who predicted the Mavericks would beat the Lakers, but I bet even he didn't see this four game sweep coming. There must be something happening with the Lakers players in the locker room. We may get to hear some things in the next couple of weeks. But for now...

Oh yeah, there was another game last night. But I was out for Mother's Day, so I didn't catch the game. From the recaps, it looks like the Hawks changed up their defense on Rose, and they put on a closing burst to finish off the Bulls and even the series. 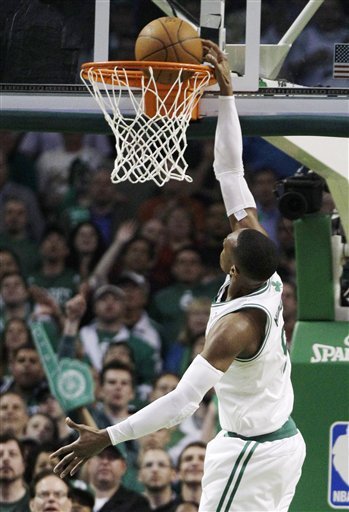 He can't hit a midrange shot, but he's got the guts of a leader.

When Rajon Rondo dislocated his left elbow, it looked like he would be out for the game. He went into the locker room, had the training staff pop it back in, and went back on the floor with his left arm dangling. While he only had 1 working arm, he still had 2 legs and a mouth, and he did a lot of talking and directing. Nevertheless, Rondo pulled off a steal and fast break dunk with only his good arm. Tough and gutsy. The Celtics will need to remain tough and gutsy to hold off the Heat and even the series. 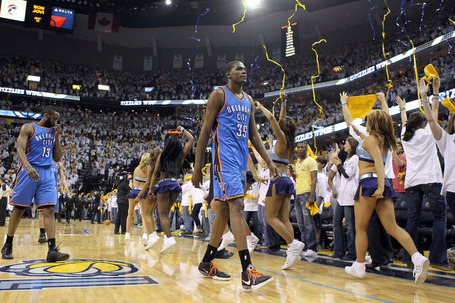 "Man, if only I had more touches of the ball late in the game."

Sincerely,
Everyone who watches the game