There are more rumors than one can keep track of leading up to any draft, but one apparently gaining steam is the San Antonio Spurs looking to crack into the lottery in exchange for George Hill.

Spurs fielding trade calls for Parker - NBA - Yahoo! Sports
If the Spurs were to trade Parker, George Hill(notes) could become their starting point guard. League sources said Hill also has drawn trade interest from teams willing to give the Spurs a pick near the back end of the lottery.

Jonathan Givony of DraftExpress followed up with his sources and identified the Golden State Warriors as one of those teams in a tweet this afternoon, in addition to the Milwaukee Bucks and Utah Jazz. 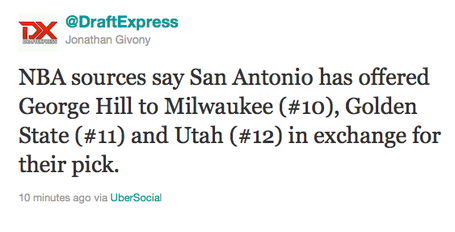 Hill is a solid player and his defensive rating has steadily improved each year, but keeping Stephen Curry and Monta Ellis (as rumored) while adding a 6'2" guard in exchange for a pick that could net a bigger guard doesn't necessarily seem consistent with what we've been hearing about the Warriors' off-season plans.