Analyzing The Golden State Warriors Defense in 2010-11: A Synergy Perspective

Share All sharing options for: Analyzing The Golden State Warriors Defense in 2010-11: A Synergy Perspective

I'm back with a brand new adventure!

In my last post I looked at the Warriors offense through the lens of Synergy statistics (found some good things and some bad things), and I promised that a) I would do the same for defense in a subsequent post; and b) the results would leave you somewhat queasy. Let's see how that goes. And now would be a good time to read the last post, if you haven't already, to get you ready for the terminology I will use here without reviewing.

The first thing I want to show are the league-wide summary plots for defense, as I did for the offense last time (the Warriors averages are represented by the blue lines): 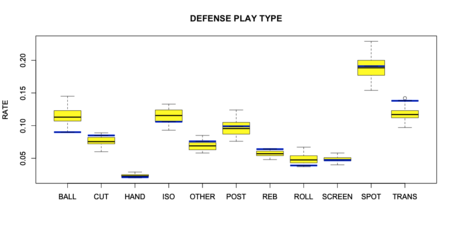 Note that opposing teams run pick and roll plays (BALL and ROLL) against us much less than other teams. They also run ISO against us relatively infrequently compared to league average. However, we give up very close to the highest rate of transition plays in the league. Only Sacramento and Detroit give up more. We also give up CUT plays at a high rate. Here is the PPP plot: 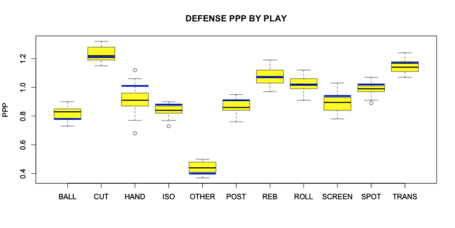 It is important to note when looking at defensive efficiency stats, higher values are WORSE (it means you're giving up more points per play). From this plot you can see that we are very good at defending BALL, which is probably the reason teams don't run it against us so much. We are not good at defending ISO, which similarly, is probably why teams run it against us so much. However, remember from last time, that ISO plays are not really efficient plays, so this might actually not be such a bad thing for us. Where we have major problems on defense, I would argue, are three areas: POST, SPOT, and TRANS. Here is a table summarizing the data for the Warriors defense last season (sorting in descending order by rate):

As I did last time, I want to show the results of a multiple linear regression analysis that I performed in an effort to try to understand which types of plays are most important for maximizing defensive efficiency:

For the most part, as one would expect, the defensive model shown above mirrors the offensive model that I described in the previous post, with two notable exceptions: 1) BALL appears here but not in the model for offense; and 2) ISO RATE does not appear in the model for defense. I would be interested to hear your thoughts on why these two parameters might be more important for defense than offense. I don't have a good explanation off-hand. Also, note that in the table above with the Warriors stats, I bolded the values that appear in the model.

The regression tells us that defending SPOT plays is by far the most important category of play type. Teams that fail to defend these plays will be at a tremendous disadvantage. Just to make it clear, the teams with the five best SPOT efficiency this season were (in order): CHI, MIL, BOS, MIA, and ORL. The five worst teams were: NYK, CLE, POR, TOR, and SAS. POST efficiency is the next most important category. The five best POST teams were: LAL, BOS, MEM, MIA, and ORL. The five worst were: LAC, SAS, PHO, DET, and TOR. And yes, it surprises me that San Antonio appears in the worst of both those categories, while Golden State appears in neither. It turns out that San Antonio was very good against BALL (SDPP = -1.325) and TRANS (SDPPP = -1.037), which helps to make up for those deficiencies. Overall, the Spurs appeared to be somewhat of an outlier, with respect to the model. But hey, this post is for GSOM, not Pounding the Rock, so let's move on with the Warriors analysis.

As I did last time, I will now go through each of the categories that appear in the model, focusing on how each member of our team contributes (or doesn't) to defensive efficiency.

These numbers are really interesting. First, we see that Udoh is a stud. His length and ability to rotate and help on spot-up attempts is clearly valuable. We also see that Curry and Ellis come in with efficiencies that are actually (surprisingly) better than league average. In fact, it may surprise you to learn (I seem to say that a lot in these posts) that Dwyane Wade, whom you most likely think is elite in this category, only has a 1.04 PPP, which is actually rather pedestrian. Lee and Williams are a little worse than average, but not tremendously so. Dorell Wright and Biedrins are the two guys who appear to be the big issues here. It's not so surprising with Biedrins, he's not the quickest guy around. But Wright? He's long, has good hops, and is generally thought of as an above-average athlete. He was touted as a guy who was going to bring a defensive mindset and talent. I hope that with a more defensive-minded coach and a better scheme, Dorell could make tremendous improvement in this area. Otherwise, that is why I am so keen on drafting a guy like Chris Singleton who is known an a perimeter defender. I don't have access to all the positional averages around the league, but I took a look at the top teams against SPOT, to see how they did it. It looks to me like these teams have at least one or two guys who are tremendous at defending spot-up attempts. Chicago has three: Rose (0.83 PPP), Boozer (0.84 PPP), Deng (0.89 PPP). Now, whether that's a talent thing or a Thibodeaux effect, I can't really say. I think the good news here for us is that it's maybe not as bad a situation as it could be. If Udoh gets more playing time, if our new coach helps Wright utilize his natural physical tools, and if we, perhaps, add another good perimeter defender through the draft, we're not that far away from being, say, an average or even above-average team in this area. That should be, at least, somewhat encouraging. Another way to look at this is that our overall efficiency against spot-up attempts could be improved, if we had a better post presence, that would allow our perimeter defenders to actually stay out on the perimeter instead of collapsing the paint to prevent penetration. I'm guessing that Udoh's shot-block ability could help with that, too, but for other reasons, he may not be the long term solution down low.

Ah, one of the few good things that Biedrins provides: Post defense. It's unfortunate that he's so bad in pretty much everything else. Clearly, the major weakness that both Lee and Udoh have is POST defense. This is, well, inconvenient. Udoh helps in so many other areas on defense, so he could potentially be forgiven this, if he was not playing next to Lee, who doesn't do much really well on defense (except ISO, actually). Some better post defenders? Nene (0.88 PPP) and Marc Gasol (0.71 PPP) come to mind. DeAndre Jordan (0.81 PPP) is also strong in this area.

One thing that should be of interest here, besides the fact that we are pretty good at defending the ball handler coming off a pick, is the stats suggest how often Ellis is playing against opposing point guards. The rate at which he defends this play (25.7%) is much closer to Curry, for example, than it is to Williams (17.5%) who rarely plays the point or Dorell (11.8%), who obviously never plays point. From these numbers, I would guess that Ellis is switching onto opposing PG somewhere between 30-40% of the time. That's quite a lot. Kobe Bryant guards this type of play 15% of the time, but that's probably because the play turns into ROLL more often against him. Anyway, the bottom line is that we are pretty good at this right now, and Ellis is actually the main reason for that.

Synergy doesn't keep individual stats for transition plays. Not sure why that is, but it doesn't give me much to work with. When you're a relatively small team that employs a risky, gambling style of defense and gives up a lot of long rebounds because you take a lot of jump shots, it's not surprising that transition defense would be a weakness.

Once again, we see a category where Udoh shines. Lee also appears to be a good iso defender, which is probably why we tend to hear that when he focuses on his man, he has the ability to be effective. (Although, to say it correctly, it's really the offense that is focusing on Lee, not the other way around.) Another surprising and counter-intuitive stat shown here is that Curry appears to be a much better isolation defender than Ellis. If you'll recall, Curry was also more efficient than Ellis in isolation on offense. This weakness of Ellis is probably the one glaring area that people recognize when they criticize his defense. And it really is glaring. Ellis turns isolation into an effective offensive play, when it generally is not. And if Ellis turns it into an effective play, Reggie Williams basically hands the opponent the keys to the rim and has a bottle of champagne ready for him after he scores.

This is another category where Synergy doesn't track stats for individual players. I would have expected us to be well below average in this category, but we're actually right around league average. However, we give up this play at a rate that is among the worst in the league (1.444 S.U.). My assumption is that if we were to fix our issues with post defense, it would simultaneously improve our defense in this area.

Overall, our defensive efficiency was among the worst in the league last season, and the main contributors to that were weaknesses against spot-up shooting (perimeter defense, Dorell?), transition (gambling too much?), isolation (Ellis?, Reggie?), and post-up (interior defense, Lee, Udoh). How do we fix all this? Well, it seems to me that some of it might be corrected by better coaching on the defensive end. I refuse to believe that Dorell Wright could not be a much better perimeter defender in a better scheme, and with more interior help to enable him to stay on the perimeter. The lack of post defense probably can't be fixed simply by coaching, and will need to be addressed by acquiring better talent. Lee and Udoh are just not big enough or strong enough to defend "the painted area". We really need a guy like Marc Gasol or Nene, or maybe even DeAndre Jordan, to help us defensively in the post. Jordan has other weaknesses, and I'm not sure he's worth a big long-term contract. Gasol or Nene would instantly (and obviously) make us a much better team. Having said that, Udoh might be the best guy to fill-in at center until we actually can land that asset.