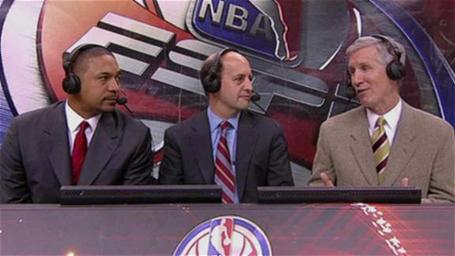 What will these guys say tonight about Mark Jackson as the Warriors head coach?

Mike Breen: So Jeff, any thoughts on your partner being a head coach?
Jeff Van Gundy: There's going to be some ugly basketball coming out of Oakland.
MB: Why's that?
JVG: Every player on the floor will be flailing their arms and falling to the floor trying to flop a foul call.
Mark Jackson: What's wrong with that? You have to sell the call!
JVG: Sell the call?!? They're NBA players, not door-to-door salesmen! I can't wait until we broadcast one of your games. Then every time I see one of your players flop, I'm pointing my finger at you and saying "Mark Jackson, you're better than that!" 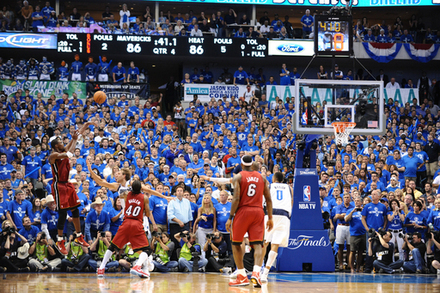 The Mavericks were giving Bosh the midrange shot, gambling that he wouldn't hit them.

But not this last shot, when Bosh hid behind a screen, and a double teamed Wade found LeBron, who found Bosh. Mavericks MUST win tonight, because I can't seem them winning two in Miami.