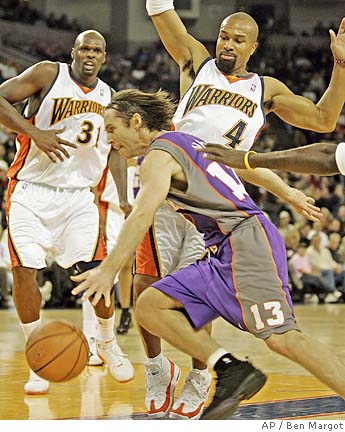 This date in Warriors-Suns history was... not memorable.

The Warriors finished 2011 on New Year's Eve like they played for the most of the previous 18 seasons- they stunk up the joint (see GameThread | Recap | Links | Synergy Recap). Here's hoping that we don't see many of those types of games in 2k12.

Everyone's Got a Crazy Cousin

The big news in the NBA landscape is the drama in Sacramento between the Kings and their seemingly mercurial and enigmatic 2nd year big man DeMarcus Cousins. Head on over to Sactown Royalty to get up to speed:

So let's assume for a second that Cousins has played his last game in a purple Kings jersey and they'd be willing to trade him within the Pacific Division. Should the Warriors be interested?

Of course they should be. Cousins looks like to be a complicated young man (to put it lightly), but I don't think anyone questions his talent (assuming that low FG% and the decision-making can be fixed with maturity). Just two years ago in the 2010 NBA Draft everyone was calling it a 5 man deep draft and the Warriors struck out by falling to the 6th slot. Cousins wound up going #5 to the Kings and the Warriors surprised many by taking Epke Udoh (instead of Greg Monroe) with the #6 pick. Udoh is already stellar defender, but there's no doubt that Cousins is a superior all-around player.

Today we've got a matinee game for the Warriors in Phoenix against the Suns. There's no other way to get 2012 kicked off right than a mid-day battle between two likely Pacific Division cellar dwellers! Here's some predictions:

Who would you rather have on the Warriors?