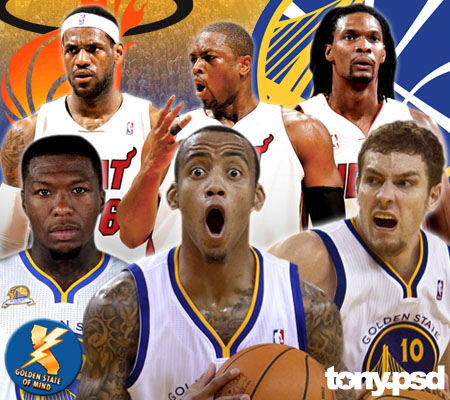 We're 2-6 folks and I've found myself a pretty disgruntled Warriors fan as of late. What more can us fans ask for this season? Dwight Howard to Golden State? Clam chowder on a sourdough bread bowl at the Oracle Arena? How about some Warrior wins! Many of us know we're better than 2-6. Personally, some of the past 3-4 games looked winnable, especially last Saturday's game vs. Utah. Oh well, it is what it is and as some fans talk, we're talking about tanking the rest of the season. Ouch, I'm hoping we can turn this around and make the best of it…

The Miami Heat is in town and I'm looking at todays match up in 2 scenarios: One, we shock the world and come up with a surprising win. Two, we get crushed by LeBron and company. Though Dwayne Wade looks like a game time decision due to his left foot contusion, it would be fun to see all 3 (James, Wade and Bosch) on the court. Hey, I'm personally in it to see the superstars tonight, a win from Golden State would be extra sweet!

Jump off for a quick breakdown to tonights game. Just win Warriors!

Notes:
• If Monta Ellis is your leading scorer, like the Utah game last Saturday - Miami is gonna aggressively guard him. We need another scoring option to help him out.

• With Miami in town, I'm hoping someone like D. Wade gives Dorrel Wright a pep talk to help him get off his shooting funk this season.

• Nate Robinson has been a big help so far, he's no Stephen Curry, his efforts are appreciated.

• Golden State turnovers got out of hand last Saturday. (17 times against Utah)

• The Miami Heat are 8-1: Best record in the NBA, period. The teams familiar with one another, they're playing good defense and leads the league in field goals/scoring percentage.

• Miami's got chemistry minus an injured Dwayne Wade. We can use that in Golden State.

Predictions
• Good Defense, cut down on turnovers and a run and gun shooting night from Golden State are key.

• Another Monta Ellis shooting night with 30+ points and 40+ minutes on the court. (please stay healthy!)

• More Brandon Rush! He played the entire 4th quarter vs. Utah and scored about 14 points.

• Cover up that inside paint and deny Miami their 50 point average under the basket.