Now that's what I call a basketball game!! It's been a mixed bag for Warriors fans so far this season, but when you get to experience a game like this one it's hard to complain. The Dubs came into tonight on a five game losing skid, without their star point guard, and looking across the court at an 8-1 team that boasts the best player on the planet, a banged up but capable D-Wade, and a resurgent Chris Bosh. It would take herculean efforts from multiple Warriors to even make this game competitive. Lucky for us, we saw so many special performances that the only hard part of my duties tonight is picking who gets to be our Warrior Wonder... Jump to find out.

Before we get to tonight's Warriors Wonder, first we have some notable runners up:

After a very competitive first half, the Heat seemed to have the Warriors figured out in the third quarter. They started trapping the ball handler every time the ball came to the wing or deeper toward the baseline. With two long athletic Heat defenders trapping hard, limited passing angle, and the sideline looming behind them, the Warriors were in panic mode almost every time down the court. We saw turnovers from multiple Warriors players (most notably Monta with 9!) as they had trouble even initiating the offense. The Warroirs had a hard time getting shots up, let alone making a field goal, yet inexplicably when the fourth quarter came around and the Heat had built a fairly comfortable 12 point lead Coach Spoelstra decided to erase this tactic from the team's playbook and forget all about it's effectiveness, even as the Warriors came charging back to force overtime. For that, he put himself in the conversation for tonight's Warrior Wonder, but that just wouldn't be right.

The team as a whole really clamped down in the fourth quarter, and held one of the league's best offensive teams, with the league's leading scorer to 12 points. That is legit defensive grit, and that kind of performance almost stole tonight's Warrior Wonder, but the players on the floor didn't do it alone.

That was beyond a playoff atmosphere. It was unbelievable. Warriors fans on a Tuesday night, nine games into the regular season both inspired their team to victory, and rattled the resolve of the Miami Heat. The energy and emotion was palpable, even through the television set. If you don't believe me, take a moment to scroll back up and watch the video of our owner completely losing his ish on television. It was beautiful.

Many of you gave me a hard time for giving Lee some respect after his work on the boards last game, but he almost stole tonight's Warrior Wonder again. His heroic work on the glass earned him 14 rebounds, 8 of which came on the offensive end where he made a huge difference securing the team extra possessions and dropping in 20 points with 3 assists and 0 turnovers. He even did a pretty adequate job on defense, making up for a few poor closeouts and missed assignments with 4 steals. On many nights that's good enough to grab the WW crown.

Now we are getting down to the real tough choices. It almost physically pains me not to give Warrior Wonder to Dorell tonight. He's been struggling so much so far in this young season that it was a pure joy to watch him break out against his old team. Tonight he dropped in 6 huge threes to help him tally his 20 points, and he was a beast on the glass in his own right with 10 boards from the small forward spot. Add to that some respectable defense on LeBron James, and a steal and a block, and this kid had himself a night. 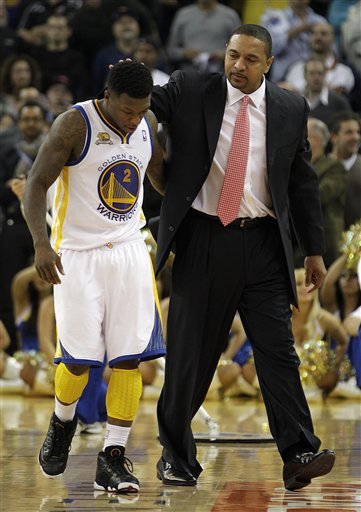 Nate Robinson was electric!! He found a way to get to the line when nobody could seem to get a bucket. He hit a huge momentum changing three that almost caused structural damage to Oracle arena due to the shock waves from the crowd erupting. His steal, and spot on three quarter court pass to a streaking Dorell was a thing of beauty. When it was all said and done, he finished with 24pts 5ast 4reb 4stl and a crazy 14 of 14 performance at the free throw line in a pressure packed game. Unbelievable performance.