The Internet is a fascinating thing. It's a tool for communication, research and entertainment. Without it, one could not immediately see photographic evidence of the uncanny resemblance between Warriors rookie Charles Jenkins and Barksdale enforcer Wee-Bey Brice. 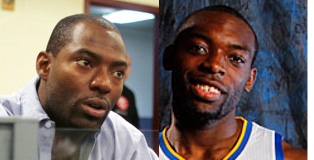 Bar bets about who the best rookie three-point shooter was (ok, you might have know that one anyhow) or which rookie had the highest punting average in NFL history might forever go unsettled. We might never know the answer to such questions as 'whatever became of Philip Michael Thomas?' It can bring us images both beautiful and repulsive. And while it holds fantastic utility at times, at others, it seems almost completely useless and inane. It can bring out fabulous dialog filled with intelligent debate and insight as well as the predictable base devolution of communication one might expect from such an inclusive tool. All of our lives would be significantly different without it.

Potential legislation has the potential to change aspects of the Internet. How much? In what ways? It is not entirely clear from the bills as written, but I for one would rather be sure than have poorly designed laws forced upon us. As a small part in preventing this, I urge all of you who reside in the USA to investigate SOPA and PIPA and to contact your legislative representatives, making sure that they understand the implications of their legislation.

At the very least, I urge you to learn a bit more about it yourselves. SBNation has summarized their position and opinion of the legislative movements in this statement (a statement I had zero part in crafting or publishing). It is not the only valid opinion but it is certainly worth reading.

OK, off my soap box and on to basketball after the jump.

I did not use our wonderful Internet to check if it was a half price night in New Jersey, but both teams only brought half the game in this the Warriors last visit* to the Prudential Center, providing the Nets with their first home victory of the season. Normally, the game is played at both ends of the court by both teams. But when both teams nail more than half their shots it screams out in bold print:

Unable to contest enough shots, the Warriors surrendered 50% shooting to a club that was hovering at 41% from the floor for the season. While Monta's 6 steals were impressive, they were a mark of some gambling to catch up on legs that were not moving as fast as they normally do. As such, his 30 points paired with 2 and 9 from Jenkins and Nate Robinson were outdone by the combined output of the Nets' backcourt. Talented and productive rookie MarShon Brooks' managed 22 points on 8-15 shooting to go along with 6 assists, while Deron Williams poured in 24 with 10 dishes on the side, well ahead of the subpar substandard shooting that had marked most of his season so far. Indeed four of the Nets starters finished with double digit point totals.

The Warriors themselves did not face stellar defense. New Jersey entered with the league's worst defensive FG%. Fitz may have muttered something about a 'well played' game when shot after shot fell for both teams, but reality was that neither team did enough to stop the other, relying instead on trying to out-shoot the other. The Warriors actually managed an edge in shooting (51.4% on 72 shots) but that only slightly outpaced the Nets.

And when you cannot beat a team by shooting significantly better from the floor, your options for winning come down to either winning it at the line or taking more shots. In both departments, the Warriors fell short. The 18-27 from the charity stripe did not help. But the real culprit was on the glass where the Warriors...

Did not rebound effectively!

While this season has, for the most part, seen much better performances on the glass than we were used to for the previous few seasons, tonight it all fell apart. And while I know I've been known to worship at the church of the (perhaps overvalued) rebound, this much is true: it is much tougher to win when you lose the battle of the boards by 20. This meant more shots and, importantly, more second chance shots for the Nets and fewer second chance opportunities for the Warriors.

Tired legs? Perhaps. This could explain an underwhelming defensive outing and a poorer than expected rebounding outcome. It is entirely possible that the Warriors were just out of gas, It came at the end of a road trip playing their second game in as many nights. Perhaps a solid signal of the difference between last year's outings and this year's squad under Mark Jackson, at least the team did not appear to allow fatigue to radically diminish their effort. Nonetheless, tired legs are tired legs and they just don't jump as high for rebounds or close on shooters as fast. There were some signs early that there may have been. Monta took a first quarter open-court steal and converted it into a layup rather than go up for the dunk. And to their credit, the Warriors did manage to score in the paint early on rather than settling for long jumper after long jumper as many a tired player will do.

And despite all this, for more than three quarters, it still looked like victory was likely. It was only the last sputtering minutes where the Nets pulled ahead and Golden State stalled when trying to grab back the game. As such, in the end it meant splitting on a road trip where 3 and 1 was a real possibility.

(Footnote: *The meeting will be the final barring a miraculously improbable meeting of both franchises in an NBA finals confrontation. And while I am certain that some Nets fans will speak highly of some of the talent on their team, they, like us, have to be realists and realize that odds this happening are not good.)