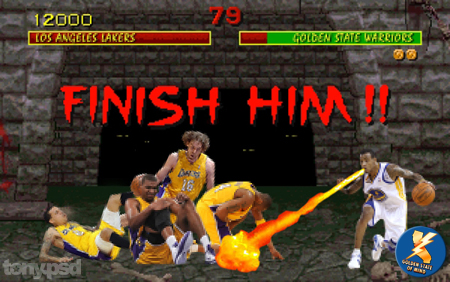 Just "Finish" with a win Golden State!
[Photoshopped by Tony.psd]

"Finish Him!" as in, just finish the game with a "win" and get the squads morale up. We're dead last in the Western Conference and it's not a good look. Shock us Warrior fans like you did against the Bulls and the Knicks in the beginning of the season. This one's gonna be tough since we're facing a Lakers team playing at home with our win count being not so high at the Staples Center. Coming from a fan, it would be cool to "Beat LA" on its home floor but to "Shock LA" with a monstrous finish… Hey, A Warrior fan can dream!

Join the jump off for a quick breakdown to tonight's game. Warriors Son! 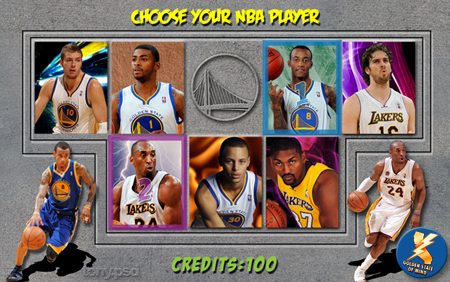 • I'm day dreaming as a Warrior fan for a big win, but compared to our wins against Chicago and New York, we're hurt. Stephen Curry's recurring ankle sprain, David Lee returning from food poisoning illness, guys like Biedrins, banged up and Monta playing way too many minutes, it's gonna take a huge team effort to come out on top.

• Dorell Wright and Klay Thompson still trying to find their rhythm… Hopefully they heat up tonight from the field.

• Lakers played last night against Portland and took a loss… that feeling of playing back to back games could help us out. If anything, the Blazers either softened them up or got them hungry for a win!

• Let's talk about Andrew Bynum - can you say "Beast Mode?!" Bynum's huge double-double with 21 points and 22 rebounds against Houston was epic and he's keeping his double doubles consistent night after night.

• As always - Defense and a great shooting night (wish us luck on that, lol) for the Warriors.

• Monta Ellis is gonna put on a show: minimum 35+ point game at the Staples Center.

• What can Brown do for you? Hopefully defend your post Kwame!

• "The Bench" will give us a solid performance or atlas hold up the lead!

Poll: Who would win a "Bay vs. LA" Celebrity Basketball match?