The Golden State Warriors Warriors Media Day kicks off today at 3pm. Like the first day of school, there's excitement and anticipation in the air, as training camp and preseason is right around the corner.

Today is the Warriors Media Day, which means vacation time is over, and preseason is just a step away. Like a kid on the first day of school, I'm feeling pumped and excited in anticipation for the 2012-2013 season.

When we last saw the Warriors in Summer League, the Warriors went an undefeated 5-0. But they didn't beat their opponents by outscoring them. No, they did it in a new and confounding style that I've never seen before. According to my research, there is a technical term that describes this style, but I had never seen this term before, and I a hard time saying the word out loud. It was like something from a foreign language. Dee... um, deef... uh, ...ence er, deef-ence?

That's right! The Summer League Warriors played defense! They won each game by rotating, helping, and trapping the opponents, making it harder for them to score. It was the first sign of the culture change we were promised last season. Would this new "deef-ence" carry over into training camp and the regular season? That's the question of the month.

But before we jump into training camp, we first get to meet the Warriors on Media Day, or as they call it, Tweedia Day. You can tweet questions to the Warriors twitter account "warriors" with the hashtag #TweediaDay. They'll answer as many as they can when Tweedia day starts at 3pm PDT.

I'm not sure what kind of online streaming coverage they will have. If they have something I can embed, I'll add it here.

David Lee is happy to be back: 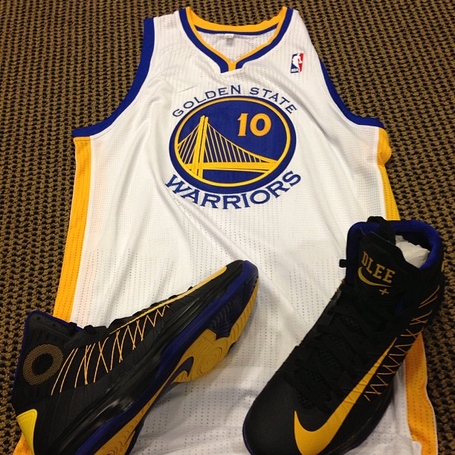