I always like to take this opportunity before the season starts to reflect, so let's go back before we go forward:

There's quite a lot history in those GSoM archives- 7 years in the making!

Onwards and hopefully upwards towards more W's this season...

The 2011-2012 season was absolutely unwatchable thanks to an indefensible decision to maintain the status quo (Not using the amnesty on Andris Biedrins? Good grief, Charlie Brown!) and the blatant tank job after the Monta Ellis trade. The Warriors tankfest in the second half of last season was deemed so memorable by the general public that there's a Wikipedia entry for it.

If you can actually stomach more of a rewind of last year's Warriors season, here's more for you:

+ 2011-2012 Golden State Warriors Report Card - Some bright spots, and the same unerasable dark spot
That was not good.

Somewhere Dorell Wright is pump-faking his shadow, but bad jokes aside, Wright had a very solid 2010-2011 season for Coach Keith Smart and the Warriors on a bargain contract inked by GM Larry Riley. I wouldn't be surprised if DWright brought the right stuff to the Sixers this season.

Somewhere Nate Robinson is dunking over Shawn Bradley (after 23 attempts), but bad jokes aside, when NateRob is on he's one of the best shows on the hardwood. He will be missed.

With all due respect to Mickell Gladness, Dominic McGuire, Mikki Moore, and Chris Wright, those losses are not exactly key.

I bring you the best Warriors big man since... Rony Siekaly.

(Well, okay at least the preseason 1994 hyped version of Siekaly that was coming off 5 straight double-double seasons. Look it up.)

I know technically the Aussie big man was on the Warriors last season, so he's not a new addition. But seeing how Bogut played as many minutes last season for the Warriors as yours truly, I think he qualifies. If he can give the Dubs some of the pre-Warriors 1994 Siekaly (the 16-11 variety) the Warriors have a great shot at the P WORD.

Somehow the Warriors walked away from this offseason with the best backup point guard they've had since... Avery Johnson.

Unlike last season if Mr. C WORD (the Raiders have a commitment to excellence, here at GSoM we have a commitment to not jinx things) goes down for 10-15 games, the Warriors are not screwed. Last season for the New Orleans Hornets Jarrett Jack was good for nearly 16ppg and 6apg nightly playing starters minutes with solid efficiency. Chris Paul who? Kidding...

Okay, that's probably a stretch but there's genuine excitement about what's to come from these 3 rookies.

Is Harrison Barnes (#7) going to be closer to the guy who was projected out of high school to be a future #1 overall pick or the inefficient volume scorer from UNC?

Is Festus Ezeli (#30) going to be closer to the guy who gave #1 overall pick Anthony Davis some issues with his stellar D or what you typically get from the last pick in the first round of an NBA Draft?

Is Draymond Green (#35) going to be closer to the guy who ranks alongside Oscar Robertson and Magic Johnson as the only 3 players in NCAA history to have multiple triple-doubles in the spring tourney or your typical second round pick of an NBA Draft?

We will find out soon enough...

1. What significant moves were made during the off-season?

I don't think Larry Riley got enough credit for his 3 year with the Warriors. He walked into an unenviable situation and handled it with class. Sure there were some mistakes, but he reversed a culture where idiotic moves were the norm. He was for the most part very conservative, but thankfully he didn't make any silly long term signings like his predecessor Chris Mullin (Adonal Foyle, Derek Fisher, Mike Dunleavy, Troy Murphy, Andris Biedrins). Riley spent most of his time cleaning up Mullin and Robert Rowell's mess, so he was handicapped from day 1.

Having said that, it was time for a change and for the new regime to make a mark. Here's hoping Bob Meyers can do what many before him could not.

From the artist renderings and videos, the SF new arena on the waterfront by Piers 30-32 looks to be a stunning work of art. Hopefully this will translate into more wins by making the Warriors more of a destination franchise.

However, as an East Bay native and a long time Warriors fan, I am extremely sad to see the Warriors leaving Oakland. Regardless of the team's win-loss record there was always energy and exuberance at the Roaracle. I fear that many of my golden friends and that culture of craziness will be priced out and unwelcome in SF. We've got 5 years to see how this plays out...

2. What are the team's biggest strengths?

Stephen Curry, Klay Thompson, and Brandon Rush (at least last year) are elite shooters. If Coach Mark Jackson Mike Malone doesn't run a Princeton-type offense or some Reggie Miller-esque screens for these guys to take advantage of their perimeter shooting, I will be disappointed. Richard Jefferson can also knock down the 3-ball at a good rate and David Lee has a very capable mid-range jumpshot, especially for a power forward. This team can shoot.

Where are Rick Adelman and Pete Carril when you need them? (Please note, I didn't say Rick Adelman and Dave Twardzik!) They aren't Chris Webber and Vlade Divac, but Bogut and Lee have the potential to be an outstanding big man passing tandem. Running the offense through them in the half court doesn't seem like a bad idea at all. It's a perimeter shooter's dream. Just ask Mike Bibby and Peja Stojakovic.

Rush (presumably with Barnes starting), Jack, Carl Landry, and Jefferson on paper look like a solid bench. There's a big hole at the backup center spot (ahem, Biedrins), but the Warriors are set at the other backup spots.

This one's pretty self explanatory. There's a reason why GSoM Nights are so hype. Hope to see you at GSoM Night 12 where Jerry West will be doing an exclusive Q&A for this mighty community! 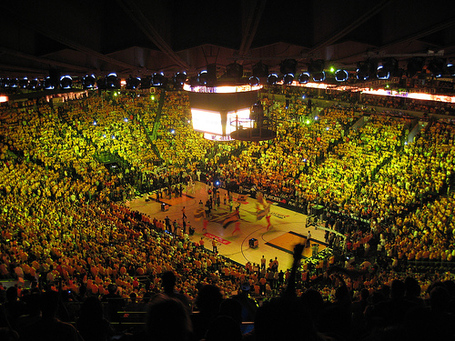 All it takes is the 8th seed in a league where half the teams make the P WORD for this to happen.

3. What are the team's biggest weaknesses?

Curry, Lee, and Thompson are going to get heavy minutes this season. It's very likely opponents are going to have heavy offensive outputs against their defense. I don't blame their effort or desire on the defensive end, but there's a problem when 3/5 of the Warriors starting 5 has about a 0.5% chance of getting a single vote for the 2012-2013 NBA All-Defense Team.

The Warriors might have the only head coach in the league who doesn't work crazy hours and doesn't draw up any plays. Coach Mark Jackson does have the excuse that the front office was openly tanking post-Monta Ellis trade last year and even Don Nelson couldn't get win 1,333 with that group. (Actually, I take that back he probably could.) However, Jackson's coaching results or lack thereof prior to the tanking did not live up to all his bold proclamations. Here's what happened BEFORE the tanking:

Matt Steinmetz's review Jackson not making good on guarantees is spot on. Coach Mike Singletary Mark Jackson is all talk, no X's, no O's, and not enough W's. He wasn't qualified to be hired this past summer with ZERO coaching experience at any level on his resume and it shows. At the All-Star break all the big talk has resulted in a .433 winning rate, actually worse than Coach Keith Smart's .439 last season. Jackson is of course "accomplishing" this with a superior bench to the one Coach Smart had to work with last season and a home-heavy opening schedule.

I am not impressed by the second coming of Coach Mike Singletary. Stan Van Gundy anyone? How about we see if Hall of Famer Don Nelson can take the Warriors back to the promised land (1st round of the P WORD- it's the Warriors after all)?

4. What are the goals for this team?

Nothing more, nothing less.

Don't worry, I won't say it and jinx things.

Post your predictions for the 2012-2013 Golden State Warriors in the comments and we'll see you at GSoM Night 12 for opening night at the Roaracle!