Warriors vs Suns: Play of the night - Andrew Bogut does it all on D

There was plenty for Dubs fans to get excited about when the new look Golden State Warriors came out and beat the Phoenix Suns on opening night in what was a decidedly not so Warrios-like win, but this play in particular should bring hope to those Golden State fans that have been wondering how much of an impact a healthy Andrew Bogut could have on the team's defense.

Share All sharing options for: Warriors vs Suns: Play of the night - Andrew Bogut does it all on D

Tonight's GSoM play of the night came right after what could have been GSoM's joke of the night (Hmm, there's an idea for a new feature) when David Lee decided it was a good idea to try to pass it to himself off the backboard. Not surprisingly that didn't work out all that well, and the Suns recovered the ball and tried to run the ball back. Luckily all five Warriors were able to get back, but Dragic stayed aggressive, putting pressure on the defense before they got set, in hopes of creating some early offensive opportunities and that's where we'll jump in the play. 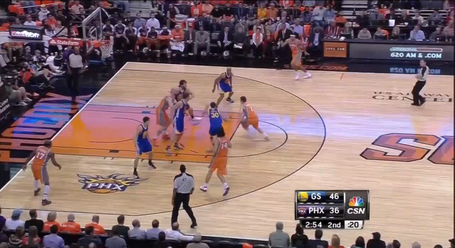 Here we can see that Dragic has Curry beat and he's heading into the lane. In the past Curry might have been relying on Lee to provide help D in a situation like this which would have resulted in him watching Dragic fly by while he gets in position for a rebound just in case Dragic missed the wide open layup he just allowed. Or maybe it would have been Andris Biedrins retreating toward the basket and jumping straight in the air with both arms outstretched, picking up a foul and giving Goran a chance at the and one. Lucky for Warriors fans Bogut is in the game. At this point in the play Bogut has taken position near Gortat, but when he recognizes that Curry is in trouble he reacts with quick and effective help D. 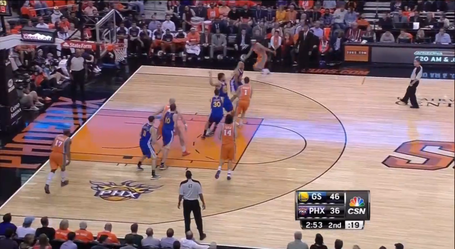 At this point Bogut has closed hard and stopped Dragic from penetrating the lane, but if Andrew thought he was only going to have to cover for one of his guard's mistakes on this play he was wrong. You can see in both slides that Jack is sitting in no mans land, not really giving help on ball penetration and not staying with his man. When Dudley sees Jack with his head turned he smartly goes back door, and Dragic delivers him the ball with a wide open lane to the rim. With Bogut closing hard all the way up at the free throw line and Lee boxed out by Gortat it looks like a sure dunk. But then... 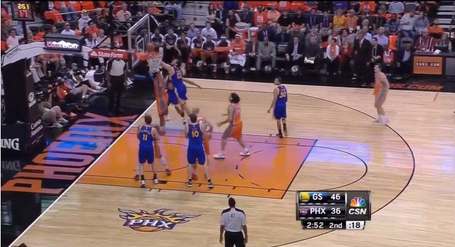 Bogut shows his incredible defensive range by getting all the way back to the rim to block the shot. This is pretty incredible when you consider that when Dudley received the pass with a full head of steam heading towards the basket Bogut's momentum was still carrying him away from the hoop. Dudley made the mistake of using a two foot gather before going up for the dunk which gave Drew just enough time to close the distance and send him away. That's two significant defensive breakdowns that Bogut single-handedly negated with his excellent defensive instincts and athleticism. And he's not even in game shape? Dang... Who's stoked to watch this guy for 30+ minutes a night?

You can watch the whole play here at about the 4:10 mark thanks to gumbywithpokey: