As the first overtime period of the Golden State Warriors loss to the Denver Nuggets was coming to a close, I was thinking that I couldn't wait to write about how this game defied my expectations of being constantly disappointed as a Warriors fan. Then disappointment happened again, I didn't want to think about this game once I got home late, and I had planned to attend a Veteran's Day event in honor of my father (a vet) this morning.

Coming back to this game with a little bit of distance from the emotions of the night at Oracle Arena, the bright side is that a lot of the things that contributed to the outcome - from missed free throws to blown defensive assignments to rotations - were within the Warriors sphere of control rather than fatal flaws with the roster, things Andrew Bogut might help solve.

Disappointment is a feeling that Golden State Warriors fans are obviously intimately familiar with.

From poor draft decisions to bad draft luck to 82-game season after 82-game season full of losses, it has become easier – maybe even safer for one's sanity – to simply expect the worst.

And yet last night's 107-101 double overtime loss to the Denver Nuggets at Oracle Arena still left me with one of the worst feelings I've had after a game in some time.

Don't get me wrong – the game wasn't without its moments of excitement: fans standing in support of Andris Biedrins when he took the line and made two free throws; the exchange of 3-pointers down the stretch in the fourth quarter in which Stephen Curry was setting the stage to be the night's hero; coming up with a couple of big defensive stops late in the fourth quarter and the first overtime. And I don't care what anybody says – Biedrins looked like he was interested in finding his way into the rotation with his 8 first half rebounds last night. The sellout crowd was roaring at times and, though it would be hyperbolic to describe the place as a playoff atmosphere, the place was electric in the fourth quarter through the first overtime.

As a basketball experience, independent of who you came there rooting for, it was a fine experience.

The electricity died down before the second overtime as a noticeable portion of people left, but that might well have been the healthiest decision – after all the excitement, the hopes of leaving the game on a high after the low in L.A. that we watched on TV, last night's loss was like a kick in the gut.

The agony of watching Carl Landry miss two free throws that would've extended the lead in the second overtime was only exceeded by that Klay Thompson's pair of misses that could have put the game just out of reach in the first.

But no game is decided in one moment, even if a team could've iced it from the charity stripe – everything that led up to those moments was just as significant.

Key statistic: Nuggets outwork the Warriors on the offensive boards

In a tight game, little things can assume great significance and winning the battle of the boards was where the Nuggets found the edge on a night when neither team shot the ball well in the first half.

The Nuggets' athleticism, height, and force of will was just overwhelming on a number of plays around the basket and when the Warriors had players not boxing out it just hurt them that much more. Where the rebounding really took on greater significance in a closer game was during the 10 minutes of overtime when the Nuggets just had more energy on the offensive boards and outscored the Warriors 6-0 in second chance points, which was exactly the kind of thing I was afraid of coming into the game.

The sort of ugly, in-the-trenches game that unfolded last night couldn't have been unexpected, by avid NBA fans or the Warriors – there's a reason the Nuggets are second in the league in offensive rebounding rate differential. Just prior to leaving for Oracle Arena last night, I watched a replay of the Nuggets November 3 loss to the Miami Heat on NBA TV and the Nuggets' game begins with their combination of relentless effort on the boards with length and athleticism to make it productive effort. Fall asleep on defense for even a second and 2-3 Nuggets players are flying at the rim for an offensive rebound.

And Kenneth Faried is the personification of that work ethic.

Nuggets statistical MVP: Kenneth Faried's energy was too much for the Warriors' frontcourt

There's no way to describe Faried other than annoying and when he's not playing the Warriors it's annoying in a way that actually makes me crack a smile.

Not only is he just everywhere, but he's just getting in his opponents' heads by poking them as they're running down the floor, refusing to give them breathing room, and talking a little smack here and there. But it works and if you buy into the Dennis Rodman comparisons that he drew as a draft prospect, the way he tries to establish a mental edge would certainly reinforce that notion.

So the first thing I said when I sat down in Oracle last night was that there was no way the Warriors would be able to contain the guy – I predicted 20 rebounds (then after beating David Lee to the basket on a couple of early possessions I switched that to 30 rebounds, which was clearly just me being dramatic). He ended up with 18 points and 17 boards. And when they needed points in overtime, Faried found a way to get a few.

The reality is that without Andrew Bogut in the middle – and possibly even with him around, just to a lesser extent - this is still not a team that's going to compete with that kind of effort.

Thompson's free throws could have essentially put the game away – there would have been no disappointment, it would have been a great antidote to the frustration of that painfully ugly game against the Lakers, and the Warriors would emerge both victorious and over .500. But Landry's were deflating in a different way because those two missed shots overshadow an otherwise strong performance off the bench.

Landry scored 4 of the Warriors' 7 points in the second overtime when the team just struggled to get things going. In a game that was decided largely in the paint, Landry was that guy who was willing to mix it up and fight in the paint, something the Warriors' roster doesn't normally have. And although he and Lee performed admirably by the numbers, the combination of the two struggled to compete on the boards against the longer and generally quicker Nuggets frontcourt.

Why did the Warriors shorten their rotation at the end of a double overtime game on the back end of a back to back?

Even if the outcome doesn't strike you as an example of why a Landry-Lee combination doesn't work, it's certainly an example of its limitations. And last night, it was evident that the Warriors coaching staff is fully committed to it, if the distribution of minutes mean anything to you: 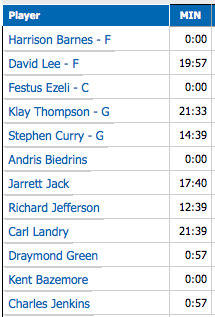 Warriors minutes in the fourth quarter and overtime vs. Denver.

In a 58 minute game, the Warriors essentially played 6 players through the final 22 minutes and relied almost exclusively on the Landry-Lee combination during that time. That helps to explain getting outworked by Faried a few times late in the game and why they just looked gassed at times.

Thompson's defensive lapse at the end of the first overtime - giving up a dunk to Danilo Gallinari - could easily be attributed to fatigue. Could rookies like Harrison Barnes or Festus Ezeli made a difference in terms of making shots or getting rebounds, respectively? Could Biedrins have continued his solid play from the first half? Obviously, the coaching staff didn't think so but could different decisions have led to a different outcome? The good thing is that the roster still has options and one option in Bogut that will eventually be available again - that hasn't been the case in the past.

Although Landry and Lee were the most impressive performers statistically, Landry's free throws and the frontcourt's inability to compete on the boards consistently sort of makes it difficult to make either of them the Warriors Wonder. That's 2 of the 6 who played in the final 22 minutes down.

Thompson's missed free throws eliminate him, Jack was basically a non-factor in overtime.

That leaves Stephen Curry: he has to get the credit for coming up with a number of big shots to keep the Warriors within striking distance of a win. With a pair of clutch threes down the stretch in regulation and the first six points of overtime, Curry was the guy who brought everyone to their feet before we walked away in disappointment.

But despite the bright spots – and in comparison to that embarrassing loss in Los Angeles, the game was full of them – this game was so disappointing because the Warriors did enough to get themselves close and then did just enough to let it slip away. As Mark Jackson said after the game, the thing that is most disappointing about last night's game is that this year's team was supposed to be good enough. This year's team has given us reason to believe their depth could get things done in tough circumstances. They showed in their win against the Clippers that they might be tough enough to make things happen.

A season of high expectations could quickly become a season of falling short.

The last two games were uninspiring to say the least from an emotional standpoint, particularly if you were at Oracle last night. But having taken a few steps back and reflecting on things now, there is a silver lining here: the Warriors can go toe to toe with expected Western Conference playoff teams, taking one to double overtime and being a few defensive lapses from beating another in double overtime.

Ultimately, the season thus far has confirmed what most of us assumed: without Bogut, this team is going to struggle to win at the rate of a playoff team. Yet given what we know now, it's also not at all unreasonable to think that this team is capable of playing .500 ball with a) Bogut in the lineup and b) playing consistent minutes; without that, the team is a game below .500.

Yes, last night's game was disappointing but that doesn't mean the franchise isn't moving forward from its dismal past.