Getting Offensive: How the Warriors can adjust and improve their offense

Three simple ways to improve the Warriors offense, which may or may not work.

Share All sharing options for: Getting Offensive: How the Warriors can adjust and improve their offense

So far this season the Warriors offense has been sputtering. There's more to fixing it than "just keep shooting" - these three modest proposals could make a lot of difference, without disrupting the team as a whole. I think of them as What, When, and Where. 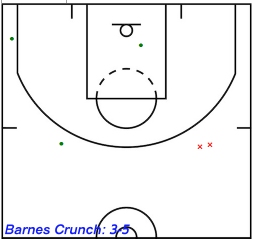 What: Play Harrison Barnes in the last three minutes of the game.

When: Start from the Outside

Madness! Everyone knows you run your offense inside-out. Only it's not working. Until Bogut can provide a legitimate offensive presence next to Lee, David is massively vulnerable to help defense with either Ezeli or Biedrins on the floor. Lee is shooting an abysmal .296 in the first period and has taken the second-most shots. Curry is at .546, Thompson and Barnes are at .471. In the second quarter it changes - Lee goes up to .556, and the others drop. Klay falls off to .346, Curry drops to .314, and Barnes plunges to .200. So switch it up - let the shooters shoot when they're making them, and run Lee inside when he's got a better chance of actually scoring. 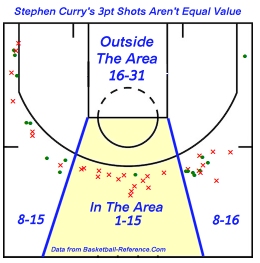 Where: No Curry 3s from the top of the arc

Insanity! Curry is a great pure shooter, it doesn't matter where he shoots from. Well, this year it does. As you can see from the accompanying chart, Steph is shooting 3s at a 50% clip from either side of the floor. And he's 1-15 from the top of the arc. (that's like .007, and I don't mean James Bond). Historically, he doesn't have this kind of drop off, so it may be a small sample size issue. On the other hand, 1-15 is below Richard Jefferson level this year. So sss or not, I'd like to see him taking the shots he's made 8 times as frequently this year, and not the ones he's more than likely to miss.

So there you have it - three simple adjustments that could help the offense be actually offensive. Would they work? Nothing is certain, except that the way we've been playing hasn't worked. Making these changes doesn't require wholesale lineup changes, or a change in our offensive identity. They only require doing what works instead of what hasn't. (All data from either basketball-reference.com or the NBA database.)