- That faint hope that Biedrins will be useful on the floor again might actually happen.
Marcus Thompson II: Warriors' Andris Biedrins building back confidence
Rusty Simmons: Can Biedrins help with Bogut out?

- When the Warriors go on the road trip, Andrew Bogut will go to LA.
Matt Steinmetz: Bogut will continue rehab with surgeon in L.A.

- Previews of the game.
Matt Steinmetz: What to watch for: Hawks at Warriors

- Before the game, Don Nelson talked about Andrew Bogut and other stuff.
Rusty Simmons: Another good moment for Nelson at Oracle 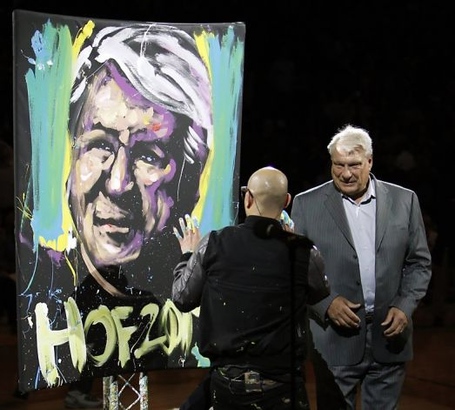 
David Lee in the locker room.

- The coaching staff has something called "The Dailies", where the players have to put in 15-20 min a day to work on a weakness of theirs with a coach.

- Our first road trip out of California takes us to Minnesota. They got some injuries, but they're still winning, so we can't use injuries as an excuse.

Golden State Warriors vs Atlanta Hawks Preview: Warriors look to get back to .500