The Golden State Warriors have played about 10% of the season so far, and while that's a small sample, it is an appropriate point to start noticing trends. In terms of results, I am fine with a 4-4 record, considering Bogut has missed 4 games. As far as I'm concerned if we can hang around .500 until Bogut gets to full health, we'll be in fine position to make a playoff run.

However, in the meantime, the offense's struggles have given me a cause for concern. There are multiple contributing factors to look at.

First thing to note, early season struggles have seen the team shooting abysmally. You know you're simply slumping when your three best scorers (Curry, Lee, Klay) are all around .100 below their career TS% and ranging between .40 and .75 of the league average efficiency- 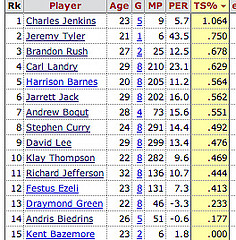 I don't expect any of those 3 to continue to sit that low in terms of scoring efficiency. Lee's been around .550 as a warrior, and that's likely where he'll end. Curry has been above .580 the last two years, and a proven elite shooter, he won't continue to shoot .327 on 3s of .371 overall from the field. And Klay, we don't really know what his shooting trend is, but I believe it'll be atleast around .550 like it was last year.

This raises the question, are we simply slumping, or is the offense not working? I'd argue it's both.

We have been running too many isolations, and considering that the team lacks elite athleticism to penetrate, it leads to too many contested jumpers. The passing has been slow and mechanical. At this point I can't tell if that's a function of a new offense + new teammates, or simply just a bad offensive scheme, and players being unable to get open and make quicker decisions.

The short answer is, it's a combination of all, and over the next 8-10 games, it's something to look out for. Does our passing get quicker?

Do we push the tempo more? Can players come off screens faster? Are we still using way too many isolations? 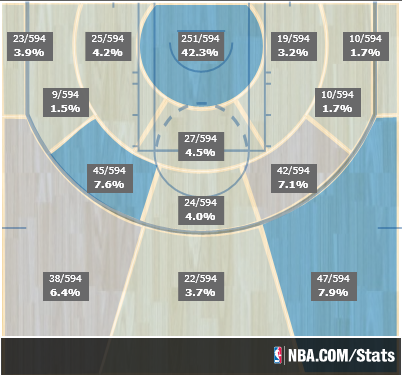 The two biggest problems I'm noticing here (as the De-thurmond analysis astutely points out): way too many 3 point shots from the wings and too few from the corners. Steph and Klay are proven to shoot best from the corners. Richard Jefferson is only a good 3 point shooter from the corners. Barnes, we're unclear, but in general, the corner 3 is the highest percentage shot outside of finishing at the rim.

From what I've seen this is a function of the offense. Way too many mid post curl-off screens getting the ball to guards or wings in the wing area, the farthest and most difficult 3. One way would be to push the tempo and have shooters filling in the corners, to give the point guard option to penetrate or kick wide (Monta did this well on fast breaks). Another option in half court sets is to actually run a proper screen and roll, DLee (and eventually, Bogut, my preferred option), set a screen to Steph, instead of popping they actually roll, Steph drifts to mid-range post area (where he shot a league leading 55% last year), and is given option, hit a rolling Lee if they don't commit, shoot the mid-ranger if no one commits to him, or hit the man in the corner, if his guy rotates to him. A simple 3 man game, we simply cannot seem to run.

In general our shot selection has not been great. 24% of our shots are coming from 16-23 feet out (worst shot in basketball). However the more worrisome factor is we rank 28th in NBA at shot attempts at the rim despite finishing them at the 8th best percentage-

For reference we ranked 9th in NBA last year in shot attempts at the rim. Without Monta, we can't simply iso and get to the rim, but we can get there other ways. As previously mentioned using an actual screen and roll (not pop) and cutting off the ball (Barnes). What's most disturbing is David Lee.

In Lee's last year in NYC (which earned him his big pay day) he was averaging 7 shot attempts at the rim per 36 minutes, this year it's 4.7. Whether it's a spacing issue, a laziness issue or a simple play call issue, it has to change. We're taking too many jumpers, and while Lee does make them around 40-43% per his career, he finishes at the rim above 66%. It's simply a better shot. Again, I would rather Steph take the mid-ranger, something he's proven he can hit off a screen at above 50% and Lee go to the rim, and finish. Even if the additional attempts lower his finishing %, it'll still be much higher than his mid-range shot. He'll likely draw more fouls too.

Moving it forward, we are taking 15th most 16-23 footers of any team in the NBA (highlighted)-

While that's not an excessive amount compared last year when we took the 6th most, it could be better, especially when you look at traditionally one of the best run offenses in NBA, the San Antonio Spurs, who rank 24th in 16-23 footers, or the NBA's current best offense, the New York Knicks, who rank 25th in terms of attempts. In general, it's not a good thing to take that many.

All and all, I'm willing to give some of the poor shooting a pass. We know Steph and Klay will not shoot this poorly all year. There's the obvious small sample size concern in terms of shots falling, and possibly even shot location. However, there is cause for concern with the offense. We can run more effective plays to get our players in position to score more effectively and efficiently. We need to move the ball quicker, and stay out of the mid-range as much as we are. We need to shoot more from the corners, and at the rim.

Our offensive rating is 98.1 (points per 100 possessions) v. 105.4 last year. Ranking us 25th this year v. 14th last year. The poor shooting of some consistent shooters is a big part, but I'd argue shot selection is equally as big an issue.

It's something to keep an eye on, to see if our shot locations change over the next 8-10 games, regardless of whether they go down or not. The mid-ranger is always going to be a worse shot than the 3 or in the restricted area. You'll always have to take some mid-rangers, but we need to stop running plays specifically for them, like the continual Lee or Landry pick and pop, or Klay off a curl screen to the 18 foot mark.

What is most at fault for our poor offensive start?