Warriors vs Grizzlies: Play of the night - Bogut blocks a shot and takes a charge on the same play

It's hard to pick a play of the night when you lose a key player to injury, but tonight Bogut gave Warriors fans another look at his defensive versatility.

Share All sharing options for: Warriors vs Grizzlies: Play of the night - Bogut blocks a shot and takes a charge on the same play

We are looking at Bogut's defensive prowess again in our Play of the Night. This play came about midway through the first quarter on a high screen and roll with Conley and Gasol. 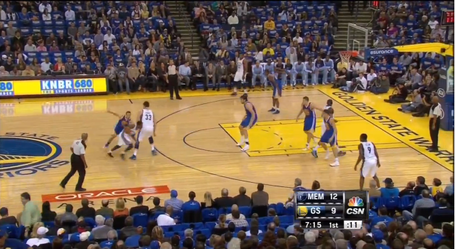 Here you can see that Gasol has come up and set the screen above the three point line, and Curry has opted to go over the screen instead of under it. They've been playing the pick and roll this way almost every time this season so I'm assuming that it's a directive from the coaching staff, but unfortunately it's been putting their big men in some precarious positions. It could just be part of teaching the guards to play a more active and physical style of defense, or maybe they just have higher expectations of their big men's ability to provide help this season. We'll have to keep an eye on that as the year goes on. Anyway, back to the play at hand. Curry fights over the screen despite it being above the arc, and Bogut positions himself at the FT line to read the play before committing. 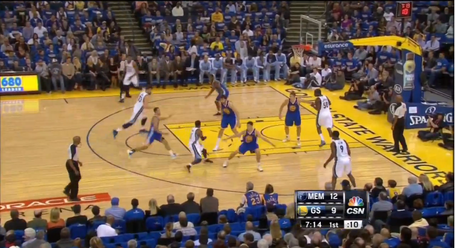 With Curry now taken out of the play Bogut and Klay have to shade over to stop Conley's penetration. At this point Conley has the choice of hitting Tony Allen in the corner for the three or hitting Gasol who is rolling to the basket. Allen isn't a threat from outside so Conley wisely chooses to hit his big man streaking to the hoop. 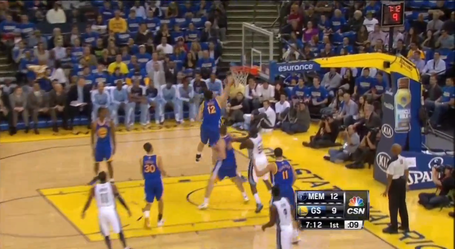 Once again we get a good look at Bogut's defensive range as he starts off at the elbow defending Conley and reacts to the pass by coming all the way across the lane quickly enough to meet a rolling Gasol at the rim to block the shot. This is really impressive when you consider Gasol caught the ball in stride heading to the basket and Bogut had to change direction before catching up with him.

But the beauty of this play doesn't end there. The ball is recovered by Randolph and kicked back out to the perimeter where Gay catches it with just a few ticks left on the shot clock. Gay drives right around Barnes, but Bogut slides over from behind Gasol and takes the charge with .4 left on the shot clock!

Watch the whole play at 1:25 of the highlights by gumbywithpokey: