Warriors vs Clippers: Play of the night - Harrison Barnes comes through in the clutch

Yes, Saturday's play of the night was probably Steph Curry taking the charge on Chris Paul in the closing moments to secure the win, but that play's already been broken down nicely over at True Hoop, so let's take a look at a really timely contribution late in the game by rookie Harrison Barnes.

Share All sharing options for: Warriors vs Clippers: Play of the night - Harrison Barnes comes through in the clutch

So to set the stage a bit, there is just over three minutes left in the game and Chris Paul has just hit a three to bring the Clippers to within one point, 103-102. The Warriors bring the ball up and look to get it back to Carl Landry in the post, who had been doing work all game long (23pts on 11-16). 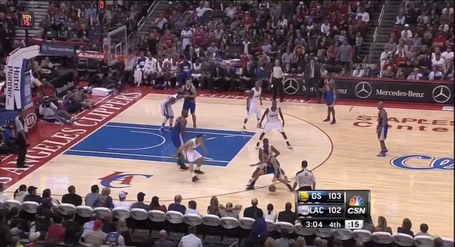 As you see the Clippers are defending the undersized Landry by fronting him with the very athletic Blake Griffin. That and the fact that Curry is being hounded by CP3 is enough for Steph to waive Landry off instead of attempting the entry pass, and call for Lee to set a high screen. 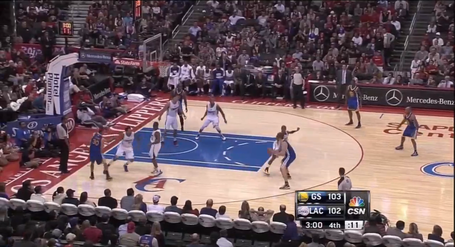 Now before Lee can actually set a screen Steph drives to his left, taking both Paul and Lee's man with him, and he's able to hit an open Lee with the behind the back pass. As you see here by the time Lee catches the ball Crawford has come over to help off of Jack. Now Lee can choose to take the contested shot, drive, or swing the ball to an open man. Jack is open at the top, but he's not set up at the three point line and it would be a pretty easy recovery for Crawford. Barnes is also open on the right wing, thanks to Caron Butler dropping into the paint when Curry made his move, so Lee opts to use the skip pass and gets it to HB. 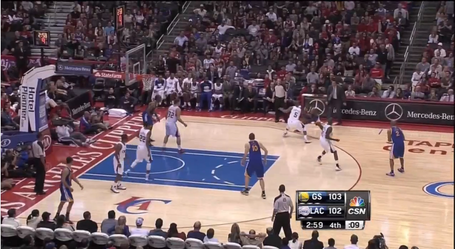 Butler closes hard to take away the three point shot. This is the right move because the book on Barnes at this point is that he settles for the outside shot too much... but not this time. Instead of jacking up a contested three, Barnes takes advantage of Caron's momentum from covering all that ground to get out to the arc, and makes an aggressive and decisive move. Harrison uses the triple threat beautifully by first showing a quick pump fake and immediately following with a hard jab step to his right, which freezes Butler. 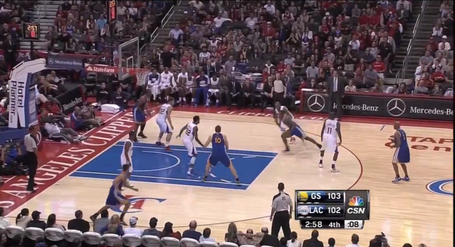 After the jab step he launches to his left and goes right around Caron. With two dribbles he's around his man and all the way to the rim, splitting two more defenders and finishing with the layup to put them up 105-102. It was really nice to see the rookie making such a strong move when the game was on the line. Moments like these will give him confidence, and give coach Jackson the confidence in him he needs to continue to put him out there in the fourth quarter of close games.

Check out the whole play at about 6:35 of the highlights by gumbywithpokey