After some unfortunate news for Golden State Warriors fans yesterday, we wanted to start your Friday off with some good news (and hopefully it will finish with more good news when the Warriors beat the Los Angeles Lakers tonight, but I digress).

GSoM is happy to formally welcome aliu27, ivanbe, and Rasputin10 to our writing crew.

While I'm sure you've all noticed aliu27 and Rasputin10's posts on the site, you will see ivanbe's first post later this morning. But we still just wanted to formally introduce all of them so you know a little bit more about their past writing experience and who they are.

Andy Liu is a student at UC San Diego but grew up in San Francisco, where his love for the Golden State Warriors has grown to new heights as the team has decreased to newly low heights. You can find his work at the school newspaper, Bleacher Report and as a newly minted Golden State of Mind member. Misery loves company and there's nothing in the world like watching Andris Biedrins shoot free throws.

Ivan is a 29 year old San Francisco native, whose interests include typography, wildlife, cheese, fine american rye whiskey, perpetually being grumpy about Fleet Week, television that doesn't suck, boxer briefs, the ladies (he's married so oh god don't publish this!), and bay area sports except for the A's and Raiders. Ivan's sports journalism experience begins and ends with his three-year stint at KZSC Santa Cruz, where he co-founded the sports department and co-hosted/produced Slug Talk, a radio show about UCSC sports (he hears you snickering behind your monitor about the concept of UCSC sports). He's been a reader of Golden State of Mind since 2006, and the crowning achievement of his GSoM career (and perhaps life) is of course this image: 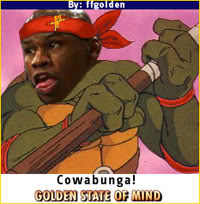 Greg chose his GSoM handle of Rasputin10 based on a Sleepy Freud joke. He started writing about basketball while he was in high school, and has done so sporadically ever since. He also writes (occasionally) on natural disasters and community resiliency, and on technological developments shaping the future. He lives in San Francisco's Mission district.

Please help us welcome these guys in the comments and be sure to follow them on Twitter as well.