Golden State Warriors vs. Indiana Pacers Q&A: How are the Pacers coping with Danny Granger's absence?

The Golden State Warriors host the Indiana Pacers tonight at 7:30 p.m. PST at Oracle Arena. Although the Pacers have been hot lately, a Q&A with SB Nation's Indy Cornrows reveals that they still have some weaknesses that the Warriors can exploit.

Share All sharing options for: Golden State Warriors vs. Indiana Pacers Q&A: How are the Pacers coping with Danny Granger's absence?

I can't even believe I'm writing this, but the Golden State Warriors enter tonight's game against the Indiana Pacers tied for first place in the Pacific Division game having won 6 of their last 8 games.

As Andy Liu wrote here on Tuesday, "With Danny Granger out and no special scorers on the Pacers' roster, the Dubs should have no problems taking care of them." Add to that the way the crowd at Oracle helped lift the Warriors to a win against the Denver Nuggets on Thursday night and it's easy to imagine them adding another notch in the win column.

However, despite Granger's absence and the team's offensive struggles, the Pacers find themselves coming to Oakland having won 5 of their own last 7, including a dramatic win against the L.A. Lakers (no, I have no idea what's happening in the Pacific Division this season either, but let's just go with this before someone wakes us up from this dream).

So what's going right with the Pacers? Who will maintain their momentum? For some rival insight to counter our West Coast bias, I contacted Ian Levy of SB Nation's Indy Cornrows with a few pre-game questions about Granger, the seeming emergence of George Hill in his absence, and what the Warriors would have to do to stop the Pacers from finishing their California road trip unblemished.

GSoM: I'm pretty sure that last time Tom Lewis & I did a Q&A it was in response to flimsy trade rumors about the Warriors offering their #7 pick for the likes of Danny Granger (and interestingly, Harrison Barnes has been compared to Granger once or twice around GSoM). At that time, Tom wrote, "...the team needs to hang on to Granger now and continue improving in other areas. They don't have anyone who can fill in that 18-20 points per game with the ability to score 35..." Yet the Pacers have won 5 of their last 7 without Granger and the two losses (at New York, vs. San Antonio) are perfectly reasonable. What has the team been doing over the last 7 games to make up for the absence of Granger?

One of those games was the ridiculous Paul George 37 point effort, an scoring output that he won't be duplicating on a regular basis. The Pacers have been talking about new movement, both ball and player, that they've installed in their offense but for the most part things look just as stagnant. They've been getting timely offense contributions from David West and George Hill and that's helped them squeeze out some games. Grinding out wins is a terrific change from where they were two weeks ago, but there is still a lot more ship-righting to do.

With regards to Granger, the Pacers certainly miss his points. But the real problem is the way his absence has pushed everyone to the fringe of their own offensive efficiency. Everyone is having to do a little bit more, and in ways they are not entirely suited for, which has dragged down the efficiency of the entire group. If and when Granger returns everyone can slide back into the usage tier they're best suited for.

GSoM: I thought it was really awesome to see a Pacers team playing without their "name" star beat a glitzy Lakers team with multiple stars in LA. For fans that don't watch the Pacers too often, what might we be able to take away about the Pacers from that big win in LA?

IL: The big take-away was that for all the offensive problems they've had this season the Pacers are still one of the best defensive teams in the league and have the pieces in place to win some games primarily with their efforts at that end of the floor. The Pacers simply cannot score consistently this season, but their effort level and defensive intensity hasn't waned. However, needing a last second shot to win a 79-77 game, against the similarly inconsistent Lakers, shows you how far away the Pacers still are from where they hoped to be at this point of the season.

GSoM: Staying with the LA game - Warriors fans take far too much joy from watching the Lakers lose - I was impressed by George Hill's game-winner against the Lakers, but almost more impressed that the top of Indy Cornrows looked like a shrine to George Hill on Thursday night. Has he exceeded your expectations this year or was this just the natural next step in his development? 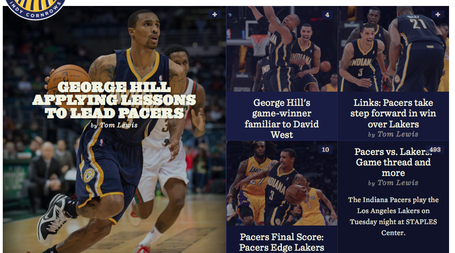 IL: He's exceeded expectations in some ways and not met them in others.

In addition to missing Granger's offense the Pacers are missing his leadership and confidence on the floor. Both West and Hill have stepped into that void and have been pushing their teammates and themselves to squeeze the pulp out of every opportunity. It's been great to see both players take on so much more responsibility, and at least four of the Pacers' wins can be directly attributed to the strong play of Hill and West down the stretch.

On the other side of the coin, watching him play point guard for 35 minutes a night has really emphasized his limitations. Hill's individual statistics are reasonable but part of the reason the Pacers' offense has sputtered is that he doesn't have those natural point guard instincts. The Pacers' offense really asks him to make good point guard plays every time down the floor and those decisions aren't always intuitive for him. He's really been doing his best, but it's becoming more and more obvious that his best may put a ceiling on how good the Pacers' half-court offense can be.

GSoM: Speaking of Hill's limitations, in a recent piece critiquing Hill and the Pacers' struggles to generate points you described the offense as one with, "...very little movement, does not involve all five players, one action occurs at a time, no pressure is applied to the defense, very little attention is paid to detail." One suggestion made in the comments there: use Roy Hibbert more as a facilitator. Overall, how well do you think the Pacers are utilizing Hibbert in their offense?

IL: There are so many variables at play here, but in my mind there are still some small things that the Pacers' could do to get more out of Hibbert.

They would like to have the bulk of his possessions come on the low block with his back to the basket, a reasonable and noble intent. Hibbert became much more effective in the post last season because he worked more quickly than he ever had before. He caught the pass and immediately went into his move instead of pounding the ball for 6-7 seconds and allowing the defense to adjust. This season everything in the offense has been developing slowly, particularly for Hibbert. He has had very few early offense opportunities and the Pacers wings have had an unbelievably hard time just making simple entry passes. It often takes 4-5 seconds of fakes before they are able to enter the ball and at that point the defense has everything in place. Everything about these post-up opportunities needs to move faster, from him crossing mid-court and establishing position, to the entry passes, to his scoring move.

The other problem is that the Pacers' offense has had not counter punches. When the defense takes the initial option away we've had no answers. For example, I can't remember a single instance this year when the Pacers were struggling to get the ball to Hibbert in the post and they've had him cross the lane to the other block while the ball is reversed around the perimeter. They just keep trying to pound that square peg into the round hole. I also think there is a real opportunity for the Pacers to explore some high-low sets with West on the block and Hibbert at the free throw line. Of course, it's difficult to be adding new things on a regular basis at this point of the season.

GSoM: This is starting to become clear based on your answers so far, but if you were to lay out a scout for beating the Pacers, what would be some of the major keys?

IL: You have to be active defensively, plug up pick-and-rolls, contain penetration and keep them off the offensive glass. I hate to say it as a Pacers fan, but those are all incredibly attainable goals. On the other side of the ball the Pacers' defense is strong, but they are susceptible to good pick-and-roll point guards. With the way the Warriors have been defending lately, a strong game from Steph Curry may be all it takes to push this one out of reach for the Pacers.

For more on the Indiana Pacers, check out SBN's Indy Cornrows.