The Golden State Warriors beat the Brooklyn Nets 109-102 at the Barclays Center to continue building early-season momentum without Andrew Bogut.

Heading out on a season-high seven game road trip after a difficult loss to the Orlando Magic at home in which they inexplicably got bullied by Big Baby, the Golden State Warriors needed a gutsy win like this just to show what they're made of.

Or maybe we as fans just really needed some evidence that the Warriors can continue their impressive start to the season as they embark upon this difficult road trip.

Pulling out a win like that on the road is not something that Warriors' fans are accustomed to and just the fact of beating a playoff-caliber team 109-102 on the road is something worthy of celebration, especially when placed in historical context. But three things in particular really stood out about tonight's win.

Warriors bounce back from a tough first quarter

The Nets came out pretty strong tonight and exploited two things in the Warriors' defense: they attempted to out-muscle the Warriors' smaller guards and when the Warriors game them threes they went 4-for-9.

The latter was an anomaly – the Nets rank 23rd in the league in 3-point shooting and suffice it to say that they went 7-for-24 for the remainder of the game. Yet the former figured to be a bigger problem, independent of abnormally hot 3-point shooting – the Nets seemed to be setting the tempo of the game and, barring unexpected growth spurts in the Warriors backcourt, it looked like they were helpless to stop it. So heading into the second down seven points, there was room for both hope and doubt about the Warriors' chances for victory.

However, the Warriors did two things well in the second quarter to turn things around, despite the Nets remaining hot from the 3-point line (4-for-7) as they shot 50% from the field. First, they turned to the small ball lineup – playing Jack the entire quarter – and just ran; the Warriors scored 10 of their 24 fast break points in the second quarter. But second, they forced the Nets bigger wing to pass the ball instead of backing the Warriors down with aggressive double teams.

And I'd be remiss to ignore the Warriors' 63.6% shooting in the second quarter.

Although the Nets finished the quarter on an 11-0 run and went into halftime up a point after a fluke three by Andray Blatche, the Warriors really laid the groundwork – or perhaps even a blueprint - for a win in the second quarter.

Key statistic: Nets shot 7-for-21 from the field in the third quarter

After a hot first half, the Warriors held the Nets to just 34.1% shooting in the second half. But the third quarter was particularly interesting when you look at the shot chart. 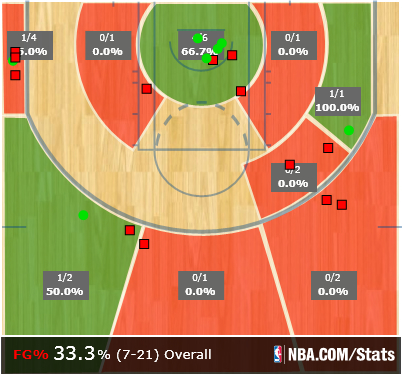 Third quarter shot chart for the Brooklyn Nets against the Golden State Warriors on 12/7/12.

The Nets offense really struggled to get anything consistent going in the paint and adding some context to the shot chart above helps to illustrate that. One of those dots is actually misplaced, so the Nets were 3-for-7 in the paint. One was a nice play by Andray Blatche inside that got him to the line. Two of them were Deron Williams layups, one in early offense after a made Warriors basket – which is the tempo the Warriors wanted to be playing – and the other off an iso set.

That's not a bad outcome for a defense.

Otherwise, as the shot chart above indicates, the Warriors turned the Nets into a somewhat turnover prone (five turnovers in the third) 3-point shooting team (10 of their 21 shots came from beyond the arc and they only made 2), which is a very favorable scenario if you want to beat the Nets.