After a great win last night, the Golden State Warriors look to go 3-0 on their road trip today at 4 p.m. against the struggling Washington Wizards. For some insight, I contacted a DC fan who has suffered through a difficult year for Monumental Sports fans.

Share All sharing options for: Golden State Warriors at Washington Wizards Q&A: A rough year for pro ball in D.C.

Football is king in Washington, D.C. and that's a good thing for sports fans in the nation's capital.

Were it not for Robert Griffin III, the Washington Redskins, and three consecutive wins over NFC East opponents, the D.C. professional sports scene would look really bleak this winter- outside of that fringe playoff team, there's not a whole lot to root for right now.

To help put things in perspective, in this calendar year Washington's NBA and WNBA teams have combined for 27 wins thus giving the Monumental Sports ownership group a pair of cellar-dwelling basketball franchises and another team that isn't even playing games at the moment.

So as the Golden State Warriors look to keep their momentum going on the road against the Wizards today, I decided to get in touch with a fan of all three Monumental Sports teams to get a feel for his mood right now after the Wizards have won two straight at home - in addition to being a community member at SB Nation's Bullets Forever, he's a contributor to SBN's women's basketball site Swish Appeal (the other place I write about basketball).

So before getting around to a preview today, a brief look into the psyche of one D.C. sports fan: thewiz06. 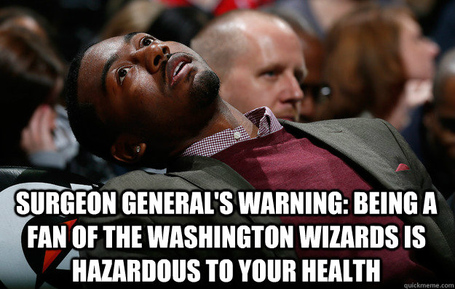 1. How confident are you that the Wizards can surprise the Warriors a bit?

thewiz06: I do think that the Wizards have a chance to win against the Warriors while they're on a seven game road trip out east. Though GS has won 9 of their last 12 games, they also have suffered some losses against inferior teams, such as against Sacramento early in November and Orlando last Monday. In addition, the Warriors are coming off that hard fought win against Brooklyn and may be thinking a little ahead toward the road game against the Heat next Wednesday. As the worst team in the NBA right now, the Wizards can't overlook anyone.

2. To the Wizards' credit, they've won their last two home games, including a win against the Heat. Were those just fluke games in which they caught a team sleeping or are they really showing signs of life?

thewiz06: In short, I think that the wins are more like signs of life rather than a fluke. The first win against the Portland Trail Blazers on November 28 was a psychological boost as much as it was a win on the record books. By finally getting a win, the team can focus on playing good basketball, instead of playing not to lose, which the Wizards were starting to do in games leading up to that point.

Do I expect the Wizards to be a playoff team? Probably not thanks to the horrible start if nothing else, but do I think that they can still play competitively every night, even without John Wall? Yes, I do.

3. Honestly, I have not watched much of the Wizards this year but I know they've actually been solid defensively. Their problem is on the other end of the floor. How much of that do you feel is John Wall related vs. a fundamental flaw with the team?

thewiz06: This team was built to run around John Wall. Without him, they have been playing a bit more half court than I'd like to see, though A.J. Price has been quite efficient with the ball so far. I think John's return will make buckets easier, but at the same time, seeing the offense as inefficient as it has been without him is also a flaw.

4. A few Warriors fans discussed the possibility of signing Andray Blatche after he was amnestied this offseason and he had a pretty good game against the Warriors last night with 22 points and 15 rebounds in the Nets' loss. But I read the transcript of Andray Blatche's recent outburst...which was weird. As someone who watched him develop, are you happy to see him succeed now or just glad to be rid of that drama?

thewiz06: For me, I am glad that he is doing well with the Nets and also that the Wizards don't have to deal with his attitude/professionalism perceptions and/or issues. In regards to his professionalism perceptions and issues, they have been persistent throughout his career, and his radio interview on WJFK 106.7 the Fan was weird in the sense that on one hand he believed that his former teammates and front office members in DC thought he wasn't a bad teammate, but also felt that the organization didn't have his back last season.

I actually have met Dray at some Wizards charity and team events over the past few years and he really is a nice guy, but at the same time, he is accountable for making sure that he was in shape last year among other things related to his job, and he does blame himself for that, but at the same time thought the organization didn't support him either just because of that or for whatever reason. I'm just glad the drama from him, and the Gilbert Arenas era as a whole is now over.

5. It has been a rough year for Monumental Sports (the ownership group for the Wizards) teams' fans: the Wizards have won 2 games, the WNBA's Mystics only won 5 in their entire season and the NHL's Capitals aren't playing at all. What, if anything, gives you hope in 2013?

thewiz06: The Redskins. That's the team that gives me hope since they do have that franchise quarterback named Robert Griffin, III.

But to hit the issue of the three Monumental Sports teams, my hope for the Wizards is that we'll continue to develop our younger players, see them improve, and win games during the middle of this season as opposed to the end when it's likely that we're well in the lottery by then. I also would like to see Nene especially continue to gel with our younger talent since his presence makes the offense more fluid than when he is not on the floor. And though owner Ted Leonsis would not want the Wizards in the 2013 NBA Draft Lottery with a strong chance for a #1 pick, we probably could use such a chance considering that Jan Vesely is looking like a bust as early as now to some fans.

The Capitals as you noted are in a lockout where negotiations have stalled yet again as of last Thursday - and I'm sure at least some Warriors fans are San Jose Sharks fans too - but when the NHL lockout ends, the Caps should still have a very competitive team on the ice, and hopefully we'll have a chance for luck to be on our side and make a run to the Stanley Cup Finals even if we don't end up as a top 3 seed. Afterall, the L.A. Kings won it all this past season as a #8 seed.

And for the Mystics... my hope is that they hire a competent front office staff, considering that their overall situation on the court is actually worse than the Wizards' current situation.

For more on the Washington Wizards, check out SBN's Bullets Forever.