Ranting and Redemption - Warriors vs Wizards

The game provided plenty of both as Golden State eventually beat Washington in what should have been a foregone conclusion. Suggestions for one, an explanation of the other, and some random notes, below.

Share All sharing options for: Ranting and Redemption - Warriors vs Wizards

So many topics, so little time. If you're in the mood for a rant, pick one:

and of course that all time classic about orchestrating a flawed offense, Turnover Beethoven

Now go ahead and write it, because the topics are obvious. We had too many turnovers. The Wizards should never have been in the game. I'd rather focus on something we did right, and that led to a 3 game winning streak on the road.

This game was the mirror of a too many Warrior games of the recent past. I don't know how many games last year ended with us outscored on free-throws, and out-rebounded. Two simple things, and after having too many games end the same way, I began to rant about it after every game.

Tonight we won both battles, and they were just enough for us to win the game. In the fourth quarter we hit 12 of 14 freethrows, while the Wizards hit 5 of 10. A seven point advantage in our favor, when the final margin was 4. We out-rebounded Washington 14-8. As much as anything else, this illustrates the difference between this year's team and past editions - we did many things wrong, and still pulled out the game. It's what the Dubs need to do.

Random Point One - the no-stats battle.

Tonight, Ezeli was as good as his opposite starting center. He's got things to work on, but Skynet is doing his job.

Random Point Two - About that Shooting...

These two illustrations from NBA.com stats tell us an interesting story about the Warriors' shooting tonight. The first illustrates the shooting of everybody except Klay, Steph, and DLee. 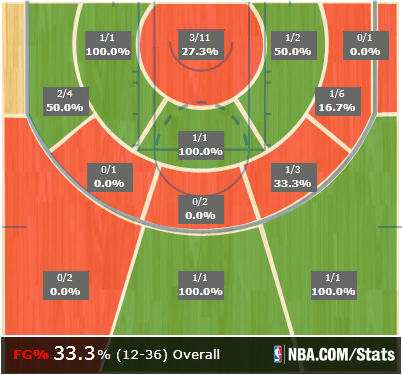 Note that 33.3%, and the areas on the floor with no makes. Barnes and Green were a combined 4 for 17, and that could be cause for concern.

The chart for Klay, Steph and David is different: 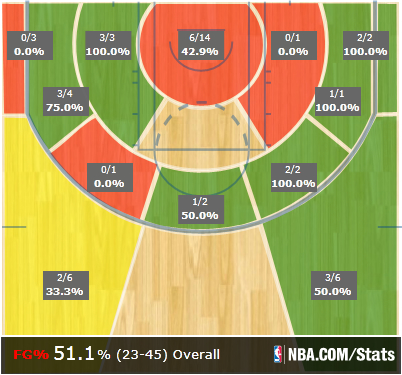 We hear a lot about our shooters, but usually don't mean David Lee. Did you know he's tied for 24th all-time in field goal percentage? Anyway, 2/3 of our field goals tonight came from our big 3 scorers. The shooting collapse wasn't so much a collapse at the top (save Curry's streak of bad 3's) as shots being taken by different people.