What Does Vegas Think of the Golden State Warriors?

Share All sharing options for: What Does Vegas Think of the Golden State Warriors?

I've been calculating Vegas Power Ratings this season based on all the spreads for every game. It's interesting and informative to know how a team rates according to Vegas, because as you probably already know, it's very tough to beat Vegas. Therefore, I would argue their rating system is probably better than virtually any other "lay person" rating you'll find on the web. In other words, when you find a rating system that can consistently beat Vegas, let me know. Or better yet, don't tell anyone, and try to make some money off of it. Chances are, if the guy posting the ratings could beat Vegas, he would keep that system to himself, don't you think? 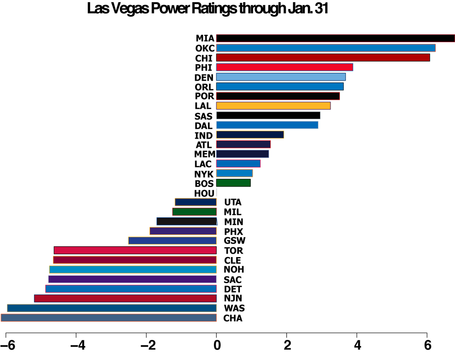 By my eyes, there looks to be about 7 fairly distinct "tiers" according to Vegas:

You guys are welcome to argue with my classification, of course. Going by Vegas, we're currently the 9th worst team in the league. With a -2.51 rating, in a normal season, we would be expected to win 35 games. In this shortened season, that translates to 28 wins. The interesting thing is that Vegas sees a real gap between us and Toronto. If I'm using this as a crystal ball, that means it might be tough for us to finish worse than the 9th worst record (although due to scheduling, it's true that absolute rating is not always going to be equivalent to final record).

So, what do you guys think? Are we better than what Vegas thinks? Worse? Or about right?