Share All sharing options for: Game Thread #24: Rockets at Warriors (or, JLFT#3 at JLFT#2) 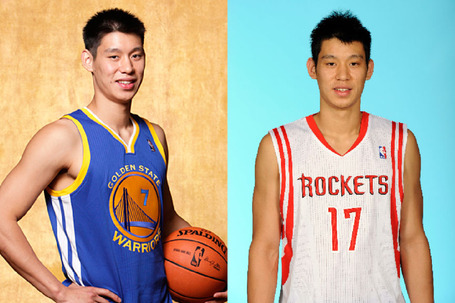 In the ninth day following the birth of Linsanity (2/4/2012, for you numerologists), Jeremy Lin Former Team #2 faced off against Jeremy Lin Former Team #3. I'm defining JLFT #1 as the Mavericks, who let him walk despite his promising showing in the 2010 Las Vegas Summer League, including what seemed then to be a fluky outplaying of highly-hyped rookie John Wall. Misery loves company, so I take some small solace in the fact that Dallas and Houston are our partners in regret. Of course the Mavs have the saving grace of being, you know, NBA Champions; and the Rockets, being the Rockets, have somehow managed to parlay the solid play of Kyle Lowry (perhaps the most underrated PG in the league) and a motley assortment of role players to a 16-11 record. Meanwhile, in Warriorland, long-suffering fans get to watch their local hero shine from 3,000 miles away; the front office keeps trying like the dickens to make a consequential move; and the slightly sub-mediocre collection of players keeps plugging away gamely, making a seeming bee line to a #8-12 draft pick that the team will promptly have to convey to the Utah Jazz.

Sigh. On the bright side, there's a Warriors game tonight! Make the jump for some predictions about the game and a couple more Lin-ecdotes.

It's easy enough to throw around words like "phenomenal" and "historic," but sometimes the best way to measure the magnitude of a cultural phenomenon is through daily anecdotes. Yesterday, as I was walking down Pell Street in NYC's Chinatown (soup dumplings at Joe's Shanghai, mmm) I walked by two bars with hastily posted sandwich boards in front hyping big TVs on which patrons could watch Jeremy Lin the Knicks. This morning, I was watching an MSNBC report on the death of Whitney Houston (RIP, Whitney), and the subject turned to her role in the "crossover" appeal of black music in the 1980s. A panelist on the show, noting the degree to which any gap between black and white music is now almost completely a thing of the past, said something like, "these days if you mention the word 'crossover,' people think you're talking about Jeremy Lin..."

• Monta takes it to the rim like Jeremy Lin: 30 points.

• Rush, Klay, and Dorell continue to stroke it from three like Jeremy Lin: 11 3FG total

Best NBA Player of All-Time, not including Jordan or Lin: