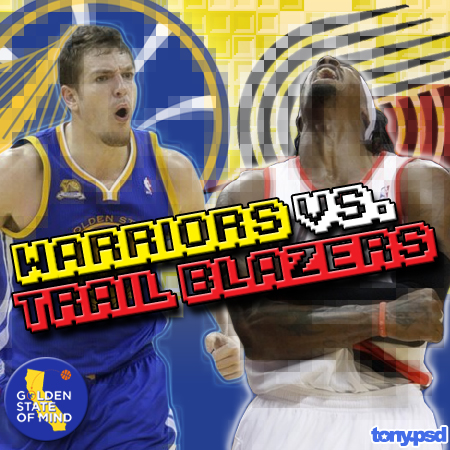 The Warriors and fans alike in the Bay Area are flying high with a big 3 game win streak… It feels pretty dang good I tell ya'! Past couple days I've been decked out in Golden State gear and folks all over Silicon Valley are high five'n me like I was part of the team! Winning is a great feeling!

So here we go… The Golden State Warriors, winners of the last 3 games about to take on the Portland Trail Blazers who last night lost to the 7-22 Washington Wizards… OUCH! Oh, and it's a back to back road trip for them that we gotta capitalize on. I got my money on Golden State - we're hungrier for a 4th straight victory and we're playing at home.

Click on over to game time predictions and join the open thread!

• Monta Ellis is gonna find the rhythm that he was missing vs. The Suns. Still a strong effort - I hope he can set the tone and outrun the Blazers.

• "DUBstitutes" - repeat performance from the bench, (38 points) nothing fancy. Solid contributions from Rush, Thompson, Udoh and the rest of the crew.

• David Lee… Give us one of the following: Double Double? Triple Double? Predicting big numbers to secure the W.

• Curry, running the floor, I was at the game on Tuesday and it was fun as heck seeing him matched up against Nash.

• The Blazers played bad last night allowing 124 points scored against one of the NBA's worst team. Repeat performance? Against the Dubs, it's gonna be close.

• (*update) LaMarcus Aldridge went down with an ankle sprain and will not be traveling to Golden State. We wish the All-Star a quick recover.

• Warriors win by 7 - We can win it or blow it. Trail Blazers have some significant injuries, played back to back games and had a poor defensive showing last night. Stay focused Golden State!

"DUBsanity"… Who goes bananas with a career night full of highlights?