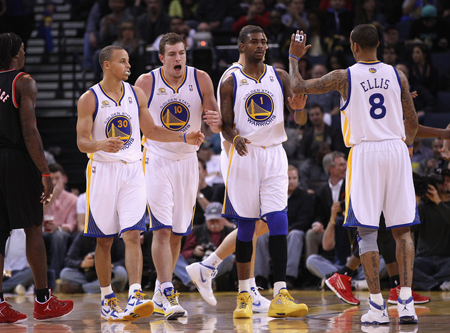 "Sorry Guys I couldn't join you guys in the fourth..." - Monta Ellis
Final Box Score | Preview Game Thread (1800 comments) | Links
Blog Buddy: Blazers Edge
When I wrote yesterdays game preview/open thread I truly believed we could win this game against the Blazers. No disrespect to Portland, they're a great team. I felt that with LaMarcus Aldridge injured (get well soon) and the team coming off a terrible loss the night before against the Washington Wizards we would have the upper hand. I let my guard down and forgot about a rule I promised myself: "It ain't over till the buzzer sounds at the end of the 4th" and I was wrong. We can't finish games in the 4th quarter and Monta was sitting pretty (I believe he was ill) on the bench.

• I felt like I didn't see the same energy I saw against Phoenix. A lot of the 3's attempted by Golden State just didn't go in. Coach Jackson even mentioned they had opportunities to close out the game and control the lead. Portland proved them wrong.

• The Blazers showed up capitalizing on the Warriors funk that evening and making up for their loss against the Wizards. Gerald Wallace dropped 24 points, Nicolas Batum another 17 points and Marcus Camby with 12 points/11 rebounds.

• Monta on the bench in the 4th? Flu like symptoms? Nate had the hot hand but who should have really taken that last shot? I'm at odds with Coach leaving Nate on the floor, though he did have a hot hand...

David Lee - Back to Back beast mode performances, just not enough for a win this time around.