How Should We Talk about Turnovers? Carefully.

Share All sharing options for: How Should We Talk about Turnovers? Carefully.

I wrote a post on my blog a couple days ago about Jeremy Lin's turnover "problem". (I don't think it's a huge problem, even though Lin did his best to make me look foolish last night). Predictably, I suppose, this post has received hundreds of hits from people searching for "Jeremy Lin turnovers". The turnover issue is also one that often comes up when discussing Stephen Curry. Curry averages 3.2 TOV per 36 minutes. Lin is averaging a whopping 5.4 TOV per 36 minutes. Steve Nash averages 4.2, Jason Kidd averages 2.7, and Chris Paul just 2.1. Lin's TOV rate seems high, but if Curry has a turnover problem, then doesn't Steve Nash? How do we judge different players in different systems with different teammates and different ball handling responsibilities? And what is the impact of these turnovers? Go to the jump to see my take on turnovers. 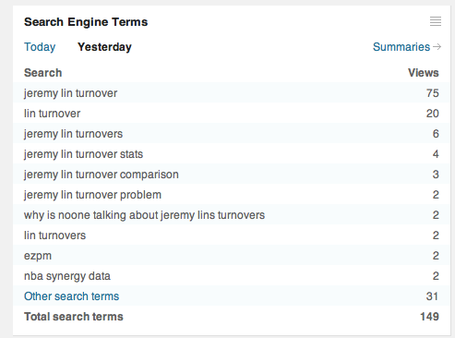 Ok, so here's the thing. When we talk about shooting efficiency, we can cite PPP or TS%. Those stats take into account how often a player shoots the ball. I think most of us agree that it's simply not right to talk about how many total points a player scores per game (PPG). And even points per 36 minutes (accounting for differences in minutes per game between different players) isn't a good solution, because it doesn't tell us about the efficiency. When discussing turnover rates, people usually default to TOV/36 minutes or less frequently TOV% (turnovers per 100 plays).

The problem with these stats is that they don't take into account how much the point guard actually handles the ball during a possession. The reason this is important is because the more a point guard or any player handles the ball, the less his teammates do. Ideally, you'd like your best ball handler to handle the ball all the time. If you did that, that player would, in theory, have all the team's turnovers. (Of course, the downside would be that he'd have to take all the shots, which may or may not be a good thing.) Now, if you look at the league-average TOV%, it's 14.2%. That means that on average, a team has 14 TOV per 100 possessions which equates to roughly 9.8 TOV per 36 minutes. Remember that's the average. How can it be that high? Well, if Chris Paul handled the ball the entire game, it probably wouldn't be that high. But even Chris Paul has to pass the ball to his teammates, and take the chance that they turn the ball over. In fact, given that the league average is much higher than the average TOV rate among point guards, one can quickly realize that turnovers are generally not a major problem for (most) point guards, but really for every other position.

We need a better way to think about turnovers then, one that can somehow adjust for the weakness of teammates and the ball handling responsibilities of the point guard in a particular system (for example, D'Antoni's). Well, one solution is to figure out how many turnovers each player is responsible for adding to the team total per 100 possessions. That may sound familiar to you, because it's the same strategy that is implemented by doing adjusted +/- (APM) or RAPM (it's fancier, more accurate cousin). Let me explain briefly how this works. We record the number of turnovers that occurred during each stint during a game. A "stint" is a series of possessions in which the same 10 players are on the floor. Each game has about 30-40 such stints. A stint typically ranges from a single possession up to about 15 or so. I can tell you that the average stint over the past 2 1/2 years is roughly 3.5.

Note: I am not the first person to calculate adjusted turnover rates. Jeremias Engelmann (who does RAPM ratings) did these ratings for 2009-2011 (so not including this season).

Once we have the turnovers and stints tabulated, we can then run a regression with turnover rate (TOV/possessions) being the dependent variable, the players on the court being the independent variables, and the number of possessions acting as a weight factor for each stint (otherwise, stints with 1 possession would be seen as equivalent to those with, say, 10). In the results I'll show here, I'm using a technique called ridge regression, which is the same technique used for determining RAPM player ratings. (If you're really interested in more of the details of this approach, I suggest reading my Advanced Stats Primer, which has a section at the end discussing adjusted +/- and a little bit about RAPM.)

I'm going to present two tables here. The first is the turnover rates for point guards. The second is for every other position. The tables are useful in the following way. If you want to predict how many turnovers a particular unit will produce (per 100 possessions), add up all the ratings for the 5 players, and then tack on the value 15.46 (which is the mean found by the regression). If you want to be really precise, subtract 0.3 from this total for the rate produced during home games.

The rankings here are with respect to all 284 players from this season (only players who have played in 2011-12 are shown).

First, I want to note that these ratings were calculated using the past two seasons through Wednesday night's games. I call this "2.5 Years". All players with greater than 500 possessions this season are shown in the tables.

If we add up the starting unit, for example, it's +0.19 per 100 possessions, which is an average rating (not surprisingly, then, GSW is ranked #13 in the league in turnover rating). As you can see here, Curry's adjusted turnover rating is -0.19, which is about 1/3 of a turnover better than Monta's +0.2 rating (remember, in this case, negative means fewer turnovers, which is better). Now, this is not to say Monta is bad and Steph is good. I would simply say neither have a major turnover problem. In fact, Andris probably has the worst turnover problem, but that's what everyone reading this assumes, anyway (I assume you assume that). Interestingly, Ekpe has the best rating on the team.

So, what does a rating of -1.0 really signify, though? Well, the way I think about it is in terms of the value of a possession. A possession is worth roughly 1 point on average. So, Chris Paul, the player with the best rating contributes about 1 point per 100 possession by making sure his team retains that one extra possession. To put this in perspective, Chris Paul's RAPM rating is +5.6 on offense (ORAPM), so roughly 1 point of that is due to this turnover rating. On the other hand, Steph Curry has a -0.16 turnover rating, and an ORAPM rating of +2.2. If Curry was on Chris Paul's level, he would have an extra 0.85 points, making his ORAPM roughly +3.2. But that's Chris Paul. The next best PG in the entire league in terms of turnover rating is Mike Conley at -0.61. That's only 0.45 points different from Curry.

And now here's the punchline. What is 1 single point worth in terms of wins over the course of a full season? Well, if you read my Advanced Stats Primer linked to earlier, you'd find out that each 1 additional point in team point differential is worth roughly 2.5 wins in an 82 game season. Thus, the difference between Curry and Paul simply due to their turnovers is about 0.85*2.5 = 2 wins. The difference between Curry and Mike Conley is 0.45*2.5 = 1 win. The difference between Curry and Nash is about 1/2 of 1 win. Ok, so you probably get the point. So, whether these numbers are "a lot", I'll leave up to the reader to decide. But these are roughly the implications of turnovers on team level outcomes. If Curry's role changes and he handles the ball more, that might actually be an improvement, because someone else would handle it less.