Warriors Recap #29: (extended edition) At the Game with Tony.psd - What an Exciting Victory!

Share All sharing options for: Warriors Recap #29: (extended edition) At the Game with Tony.psd - What an Exciting Victory! 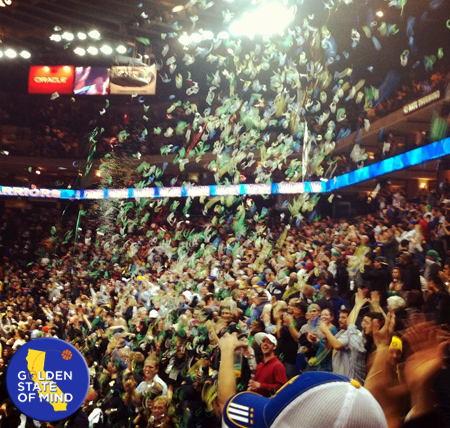 From my iphone - once the buzzer sounded at the end of the 4th, every single Warrior fan went bananas!

Last night was "Tony.psd Date Night" for me and my wife. The LA Clippers were in town and honestly, I was looking forward to seeing our Dubs (sadly) fall victim to some sweet Blake Griffin ESPN highlight dunks. It didn't happen! What we were treated to instead was a Warrior team I've patiently waited 29 games to show up. Yes, we've had some good runs these past few months but tonight was something else. It wasn't just our Dubs working the Clippers down to the wire, the atmosphere in the arena amongst fans was something I haven't felt in a very long time. I can't really explain it right now, you just had to be there. Throughout the whole game, we were going crazy, the crowd got really wild and it just really felt like a great time out! We were Cheering, screaming our brains out, high fives left and right... in the end, WE WON AND IT FELT GREAT! 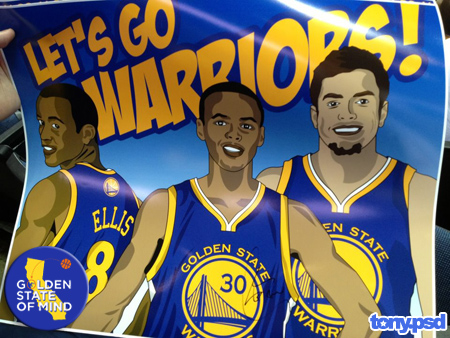 Pre-game shoot around: Signed and given the thumbs up by the man himself - Stephen Curry!

My observation at the game: (fan perspective)

- Epke Udoh: once that guy started making moves early in the game and had some key blocks against Blake Griffin, that set the tone for a wild and ecstatic crowd. The chants of "Ohhhh!" and cheers simultaneously was insane.

- Warriors defense: We saw a lot of it. Especially between David Lee and Blake Griffin, and the cool thing was that David wasn't going out like a punk. He did good limiting Blake's numbers.

- Blake Griffin: It wasn't the Blake I was use to seeing on ESPN highlights with the insane dunks. With the Warriors playing solid D, I felt like I got it in little doses. Honestly, I was either gonna see a close game or a blood bath on offense from the Clippers.

- Chris Paul: Clearly, he looked frustrated. From our seats anyways CP3 was very vocal during time outs (which is a good thing as a team mate) and frustrated with various referee calls. Again, I was hoping to see the ESPN highlight stylings of CP3 last night. Instead I got that in small doses as well.

- Warriors Starting 5: We saw a lot of them against the Clippers and they delivered a very convincing win. Nate Robinson and Brandon Rush were instrumental but the efficiency Monta Ellis, and Stephen Curry was electrifying to watch. Watching Udoh and Lee follow up on some rebounds was a bigger plus. 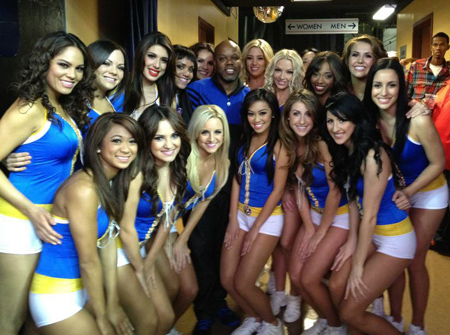 - Too $hort: Somewhere during the Warrior Girls "Blow The Whistle" performance, Bay Area Legend Too $hort jumped into the court and started rapping. My night was complete. (Photo provided by S. Chaundry) 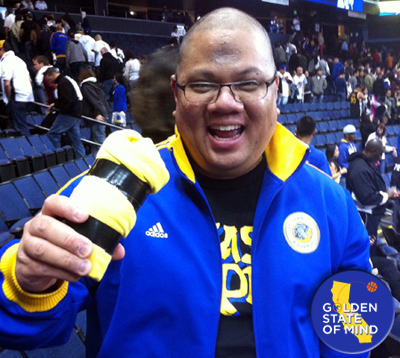 - Hoop Troop: was launching t-shirts with their nifty air gun launcher and after 7 years of trying, I finally caught one! Here's the trick: I closed my eyes the closer it got to me! When I opened em', the shirt was in my hand! It was such a rewarding feeling!

Overall, The Miami Heat game last month was probably the best game I've been to this season. This game tops that because of the Warriors execution throughout all 4 quarters, the crowds energy/vibe, oh - and Too $hort performing with the Warrior Girls!