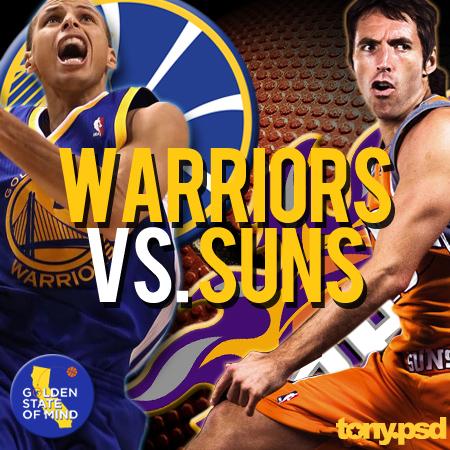 Rematch! The Warriors-Suns series this season is tied at 1-1 and a win for the Dubs would be a great start going into the All-Star break and a long 6 game road trip. While it's highly unlikely we see a repeat performance and a second win tonight from Golden State, I want to keep myself optimistic. Than again, we're playing on the road and we've been known to not look like the same team after a big win like the one we had on Monday. What's exciting about tonights game is that both Phoenix and Golden State are coming off great wins. The challenge for us is to win on the Suns home court, which is a lot to ask for. (straight losses for nearly 7 years)

The good news: Ekpe Udoh keeps his starting position tonight after his break out 19 points and 8 rebounds performance on Monday against the Clippers. Udoh's definitely going to have his hands full guarding Marcin Gorat tonight. Not only was he a headache to cover during our last game organists Phoenix, he's been averaging 20.7 points and 12.7 rebounds in the last 3 games.

Road games are not our specialty! We're 3-8 on the road and the next 6 games are not at home. I'm optimistic we can take this one - Let's go Warriors!

Notes:- All eyes are going to be on Ekpe Udoh tonight. He's given the Warriors something different in our starting line up. Hopefully Coach Jackson and the staff can cook up something special for our new starter.

- GSoM readers Fruen989 and Dinohealth pointed out Dorell Wright's numbers as a starter being ugly in the last 2 games: (0-13 overall, 0-9 on distance) Dinohealth even suggested having Wright come off the bench to spice things up... Whatever the case is, let's get Dorell on a hot streak along with our other shooters and we can go home with a win. I know, it's a lot to ask for on the road!

- Marcin Gorat beasted through the Warriors in their last meeting. Our bigs are gonna have their hands full guarding that guy. It'll be very interesting to see Udoh match up against him tonight. Throw in some help from Lee with a double team here and there and I think we should be good.

- The Suns are looking for win number 3. With 2 big back to back wins against the Lakers and Wizards, a Golden State victory will not be an easy task. A crazy shooting night, some key blocks and bench participation are keys to a win on the road.

- Insane shooting night from both teams. Winner takes the lead in this series!

- Monta Ellis has another 30+ point game and David Lee earns himself another double double.

- Contain Steve Nash, his match ups against Stephen Curry are fun to watch.

- Unsung heroes: Our "Bench Sensation" Robinson, Rush and Thompson to the rescue!