- Previews of the game.
Matt Steinmetz: Warriors-Suns: What to watch for
Marcus Thompson II: What to Watch For – Game 30

- The sixth time's a charm.
Rusty Simmons: Monta Ellis rewards coach's faith in him at finish

Mark Jackson in the hallway.

Mark Jackson
On Tonight's Game:
"I feel like we executed on both sides of the basketball when it matters most. And if I had to design a win, I would have designed it this way. It was much better for our future to grind out a win. I like the fact that they are a team that is going to compete, they got back into the game, they took control of the game. But we buckled and were disciplined enough on both sides of the basketball to come out of here with a win. It was a great victory, absolutely great victory. And Dominic McGuire, nine rebounds in limited minutes, six offensive rebounds, has a big time defensive board, does a great job defending. Just a total team effort and Monta (Ellis) with a big shot down the stretch."

Monta Ellis
On Tonight's Game:
"We played hard together as a team. I mean, my teammates, I give them full credit - catching the ball when I was passing it, setting great screens for me, getting me open shots and making big shots down the stretch, and getting defensive stops on the other end."

David Lee
On Tonight's Game:
"They are a good home team and they made a run on us. We had some stretches we didn't play as well as we should have in the second half. And the most important thing is defensively and offensively, we made some plays down the stretch capped by Monta's great shot there at the end and we're happy we were able to get that one, especially before a couple days off."

(during the game, near the end of the 1st half)
gswscribe: Curry just walked back to the bench. Appears to be fine
gswscribe: Curry just told Mark Jackson "I'm OK." He took off his warm-up. Looks like he's about to check in
gswscribe: It's not his ankle. Looks more like a thigh or a hamstring ... He can hardly move though
gswscribe: He just told Mark Jackson he can't go after testing it out
gswscribe: Curry tried to get open on that last possession and came up hobbling
Rusty_SFChron: Stephen Curry just tested out what looks like a left hammy injury and told coach Mark Jackson that he can't continue.
Rusty_SFChron: Warriors PG Steph Curry will not return with a strained right foot, according to the team. He had nine points and two assists in 11 minutes.
Rusty_SFChron: Warriors say Curry's right foot has a strained tendon, but initial X-rays were negative.
Rusty_SFChron: I'm still shocked Warriors PG Stephen Curry injured his right foot. He was limping badly on his left leg and grabbing at his hammy/quad.

- Stephen Curry suffered some kind of "strained right foot tendon" injury. He tried to test it out on the final possession of the 1st half, but he clearly could not move. Check the tweets above to see what MT2 and Rusty saw.
- Ekpe Udoh rebanged his knee in the 2nd qtr. He did come back in, but you can see he was still stung by it.
- A strained... what? Posterior tibialis tendon. It is the tendon that attaches the calf muscle to a bone in the foot. (If the image is too small, try clicking on it for the original size.) 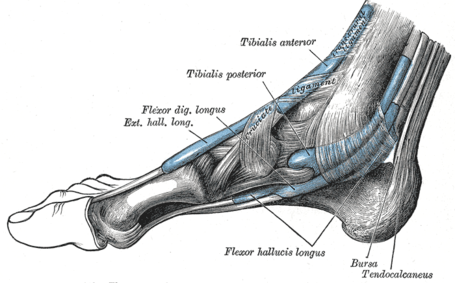 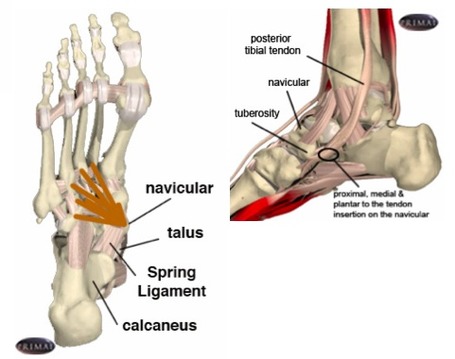 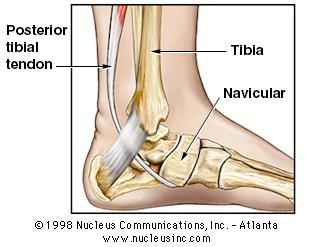 - With the Curry foot injury, the only thing we have to root for in All-Star weekend is Anthony Morrow's 3pt shooting, because we've been clamoring to get him in the contest since he was with us.
- See all those @'s? We got a massive 5 game road trip to start the 2nd half of the season. 5 games in 7 nights with a back-to-back to start it and another back-to-back to finish it.