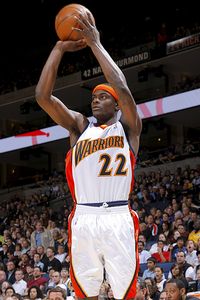 Will Stephen Curry defend his Skill Challenge title? We'll never know, because a strained foot tendon knocked him out of the competition. Who's left for us to watch? How about Anthony Morrow, aka Ammo, aka Chocolate Rain, aka why-isn't-he-in-the-3pt-contest?

After watching Daniel Gibson and Kevin Durant clang shot after shot in last season's contest, we once again scratched our heads and wondered why Anthony Morrow wasn't invited. Tonight, he finally gets his chance to show off not only his 3pt shooting, but his rapid-fire 3pt shooting.

Um, yeah. This contest is over before it begins. Anthony Morrow is going to blow them all away.

(earlier in the day)
BlackBoiPachino: First time in the contest tonight, I'm jittery but excited, that's for all the support win or lose I'm gonna enjoy this moment!!