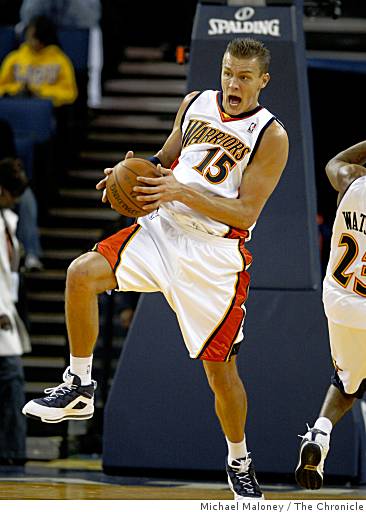 Just the mere thought of being in the Skills Challenge or 3 Point Contest makes Biedrins freak out!

Jump for an All-Star Saturday rewind and a look at today's blockbuster game...

I must say that was quite an All-Star Saturday. There were ties in both Skills Challenge and 3 Point Contest, extending both events and making them interesting. I'm impressed Kevin Love was able to beat out Kevin Durant for the Larry Bird title.

The dunk contest was shockingly a ton of fun too. Almost all of the dunks were very entertaining. The dunkfest was one of the most creative I've seen. Two ball dunk while jumping over someone? Unbelievable. Now if only I could remember those dunkers names.

So what could've made a great All-Star Saturday even better?

Seriously, how amusing would it be to watch him the Skills Challenge? We're talking about one of the least skilled players in the entire NBA. I wonder if he'd even take that first jumper. Do you think he'd runaway from those defender props out of a fear they'd foul him?

How about the 3 point contest? We're talking about a basketball player who probably hasn't taken a 3pt shot attempt in practice or shooting around for fun (actually scratch that, I seriously doubt he ever picks up a basketball for fun) in about a decade- if ever. I wonder if he'd just stand at the first rack without taking a shot. Or would he just air ball every shot?

Good times. Hopefully next year the fans will make some noise and get him in the events. That would be Unstoppable Baby!

This late afternoon's All-Star game should be a dandy. Look at these starting 5's:

That is quite a talented bunch, wouldn't you say? You could trade every single one of those players for Monta Ellis and the Warriors would be an instant playoff team.

Now let's flip through those benches.

Aside from a declining Pierce and arguably Parker, swap any of these guys for Monta and the Warriors are a better team. In most cases they're a playoff team.

Get the point? Monta Ellis is sitting at home watching the All-Star game with the rest of us Dubs junkies. There's nothing wrong with that.