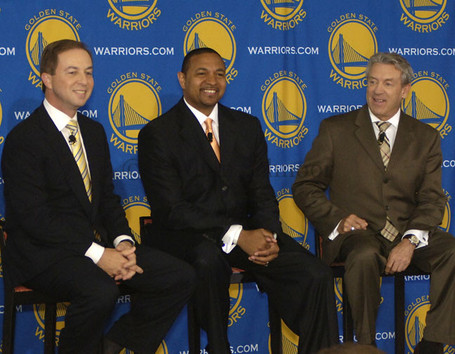 Report cards are a GSoM tradition. We kick off the midterm grades with the front office and the head coach. JUMP!

This team has the exact same starting 5 that the Chris Cohan/ Robert Rowell era of dysfunction and ineptitude ended with. The front office's continued rationale for not amnestying Andris Biedrins couldn't be any more illogical. How hard is it to understand that this core can not get it done? There is no clear plan and likely no draft pick in what is supposed to be a stacked 2012 NBA Draft.

So why not an F? Give credit where credit is due. The Lou Amundson for Brandon Rush trade was a steal. Adding Nate Robinson to the bench for nothing (not that they had any competition) is working out okay.

Matt Steinmetz's review Jackson not making good on guarantees is spot on. Coach Mike Singletary Mark Jackson is all talk, no X's, no O's, and not enough W's. He wasn't qualified to be hired this past summer with ZERO coaching experience at any level on his resume and it shows. At the All-Star break all the big talk has resulted in a .433 winning rate, actually worse than Coach Keith Smart's .439 last season. Jackson is of course "accomplishing" this with a superior bench to the one Coach Smart had to work with last season and a home-heavy opening schedule.

What are your grades for the front office and Coach Mark Jackson?
Coming up...
Part 2: The Starting 5
Part 3: The Dubstitutes