I hope you're not expecting straight A's for a starting 5 that has collected only 13 wins to 17 losses with a home-heavy schedule. 12th place in the West isn't going to get you a 3.0 either. 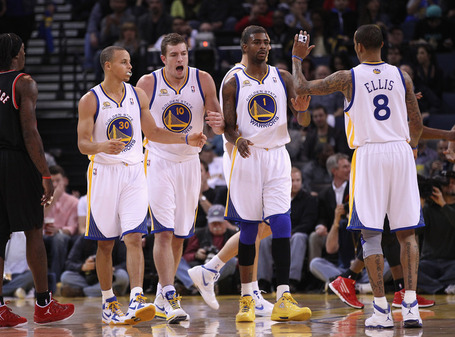 Photo evidence: Andris Biedrins is an invisible member of the starting 5.

Jump for the midterm report cards for the Warriors starting 5!

This is getting old. You know how the story goes. Monta dominates the ball and cannot defend most starting 2 guards in this league. Most of his numbers are down from a season ago. He can dazzle with some gaudy scoring nights and occasional big assist totals, but he can't win. The Warriors have proven that they can not even reach mediocrity (a 7th-9th place Western Conference standing) with Ellis as their leading scorer. Text Gate is an embarrassment too.

Key #: Monta is currently the 6th leading scorer in the NBA at 22.5ppg

I know, I know- if he could just play some better defense! Lee isn't a superstar or even a perennial All-Star (though he's paid like one), but he is giving the Warriors nice scoring and rebounding with ZERO help from the center position. He can not guard centers, but he is often forced to because of the lack of a NBA caliber 5 on this roster. It just isn't fair to knock him for that. I appreciate what Lee brings to the table and look forward to the day when the Warriors complement him with a defensive 5 who can help on the glass and pose at least some semblance of a scoring threat.

Key #: Lee is 1 of 5 players in the league currently averaging better than 19 points and 9 rebounds

The ankle woes scare Dub Nation like no other, but the bigger worry has to be that Curry really hasn't shown any improvement in his game this season. Maybe it's the lack of an offensive identity for this team. Maybe it's the lack of a run and gun Nelliball style offense. Maybe it's just tough sharing the backcourt with a ball dominating player like Monta. Maybe Mark Jackson is the wrong coach for Curry. Whatever it is, it's not looking so hot for this franchise cornerstone.

Key #: Curry's PPG are currently the lowest of his career.

Wright's not bringing the right stuff this season. He seems to be bouncing back a little especially after that terrible 3pt shooting to begin the season, but 6 less ppg and 9.5 less mpg are a big disappointment.

Lazy. Unskilled. Undisciplined. Overpaid. Soft. The low hoops IQ ain't helping either. When will the Warriors organization and a tiny remaining minority of brainwashed members of the fan base quit making excuses for the worst starting player in the entire association? Even though Biedrins doesn't belong in the NBA, it would've been a blast to see him participate in All-Star Saturday.

Key #: Through 26 games Biedrins has made ONE free throw.

What are your midterm grades for the Warriors starting 5?