For the second time this week the Warriors faced off with their Nor-Cal rivals(?) the Sacramento Kings, and for the second time this week the fate of the team was in the hands of the second unit, while the starters looked on from the bench in the fourth quarter. The subs came through again making up for a poor third quarter from the starters with a fourth quarter push to force overtime. Unfortunately, by riding the second unit hard in the fourth and leaving the starters to get cold and stiff on the bench Coach Jackson had painted himself into somewhat of a corner when faced with an overtime period. The team fell apart in OT and the Kings walked away with the crown in the intense battle of the irrelevant NBA franchises in northern California. Hit the jump for a big picture breakdown of this game, and a look at Mark Jackson's handling of the rotations.

Well, it's pretty simple. You can get a fairly clear picture of the game by looking at a few key factors.

A Tale of Two Teams: Warriors Starters vs. Warriors Bench

As the season goes on, a strange trend is forming when it comes to Coach Mark Jackson's handling of the bench. It's basically all, or nothing. He has two units, and when one isn't performing he puts in the other. I can certainly understand that from time to time a coach needs to make a statement about the poor play of his starters, and he will bench the entire unit and leave the game in the hands of the subs. This can be a good motivator for the starters, and a good confidence boost for the bench, but it's starting to look like less of a motivational tool, and more of a crutch for Jackson. 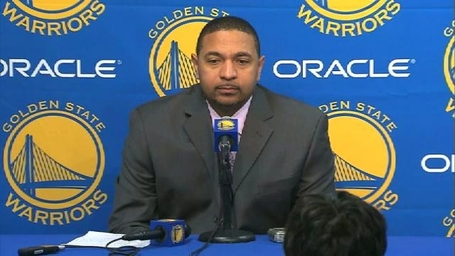 The two units have some pretty well defined strengths and weaknesses, but instead of using the coaching tool of the substitution like a surgeon's knife, blending players to find the perfect mix for the situation, he wields it like a blunt object removing any of the nuances that often lead to wins. If he continues to use the bench unit as a late game life-saver it won't take long for the shine to wear off. A lot like backup quarterbacks, NBA subs may look like an attractive option, but if you give them enough playing time they usually remind you why they were on the bench in the first place.

I could easily give this to the entire bench unit again, but I'd rather highlight Klay "The Kloser" Thompson's excellent late game play on both sides of the court. Great shooting, and effective defense from Klay when it counted.