Regrets, we've had (more than) a few: the GSoM poll

Share All sharing options for: Regrets, we've had (more than) a few: the GSoM poll 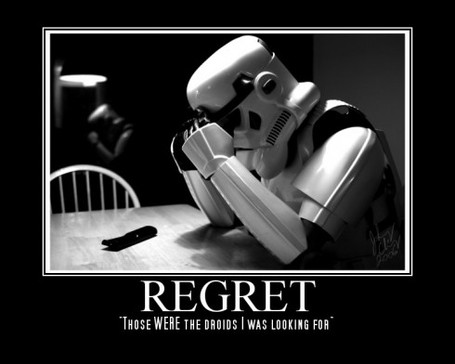 OK, let's get this in the numerical form. With the snap of the fingers, you can have any ex-Warrior you want back on the team, right now, on a bargain-basement contract (let's say 3/$9M). Who are you taking?

Personally ... I'm voting Morrow, partly 'cos I miss his winning personality and the sweet Carolinian synergy he had working with Curry for a season or so. I'm also still miffed that we made so little effort to keep Reggie "Mr. Potatohead" Williams, a similar player to Morrow with a slightly more diverse offensive arsenal. I'd put old friend Jason Richardson in basically the same category as Morrow and Reggie, but he's getting a little long in the tooth now (just turned 31 — happy belated B-day, JRich!). This diary is about looking forward, not looking back at how good the team might or might not have been over the past X years had we not let player X go when we did.

Somewhat à propos: one guy I could almost see making my dark horse pick is Brandan "BrokenWing" Wright. Tiny sample size (147 total minutes), but he's currently averaging 18.6 pts on .652 ts% and 3.7 blocks per 36 with the Mavs. If he could ever stay in one piece and play regular minutes — two rather huge ifs — I think he could be the most talented NBA player let we've walk since Webber, at a position we always need. Much as I miss Morrow and Reggie, I have to admit that shooting guards of their ilk are not that hard come by (as the fact that the we came by them as an undrafted rookie and D-leaguer, respectively, probably attests). Indeed, the solid play this season of Brandon Rush and rapidly improving game of Klay Thompson has already made me miss them both a bit less.

More than anything else, what this list says to me is that, much as we all like to weep on this site (myself included), we haven't really let anyone of particular import walk since Chris Webber. Then again, with the possible exception of Stephen Curry, we haven't really had any player of particular import since Baron Davis lost his passion for the game.

(Now if we're talking about guys we've whiffed on in the draft, that's a whole 'nother giant can o' worms, one I won't open here except to say: Ike Diogu over Andrew Bynum, really????)