Warriors Vs. Mavericks Recap: Warriors Did Not Need Stephen Curry To Return In Biggest Win Of Season

Share All sharing options for: Warriors Vs. Mavericks Recap: Warriors Did Not Need Stephen Curry To Return In Biggest Win Of Season

Before moving past the Golden State Warriors' 111-87 win over the Dallas Mavericks - and to questions about Stephen Curry's ankle and future below - it's worth fully appreciating what happened at Oracle Arena last night to deserve a standing ovation from the 19,596 fans in attendance during the waning moments of the game.

Even if you're among those who are more interested in keeping a lottery pick than sneaking into the playoffs as an 8th seed, last night's win was one of the more gratifying wins we've had the pleasure of watching this season.

In addition to being the Mavs' worst loss of the season, it was the Warriors' biggest win not just of the season but since the 24-point win over the Portland Trailblazers on April 13, 2011, the final regular season game of last season.

Now let's be real: this was arguably more of a lockout loss for the Mavericks than an encouraging win for the Warriors.

Dallas point guard Jason Kidd too a "DNP-REST" as the Mavs were playing their third road game in three nights and the fifth game in the last week. Exhaustion should've been expected and they looked it almost from the start.

On the other side of that outcome, one of the other casualties of the lockout-shortened season is that fans of teams with sub-.500 talent don't get a whole lot of time to simply enjoy the highs of the season for what they are before they move on to the next game. But after an "embarrassing" performance at home on Wednesday against the Memphis Grizzlies, last night's game was a great win not for the purposes of any kind of playoff chase or beating a limping defending champion when they were down, but because the Warriors put forth the kind of effort that any fan of any sport hopes to see from their team.

I can be as pessimistic as any Warriors fan, but every now and then, you just need one of those wins to keep you engaged in the ongoing cycle of mediocrity.

David Lee's 13 points on 6-for-10 shooting in the first quarter was what got this thing going in the right direction for the Warriors. We could harp on Lee's defense against Dirk Nowitzki - especially in the second quarter when Nowitzki seemed to start finding a rhythm with his off-balance jumpers in isolation situations - but after a few lackluster games from him it was nice to see him come out as productive as he was.

Ok, so now to Curry's ankle.

CSN's Matt Steinmetz offered the following summary on the situation today, which doesn't sound as serious as it first looked:

Curry's status: Warriors point guard Stephen Curry tweaked his right ankle again during the second half of Saturday's game against Dallas. Warriors coach Mark Jackson said Curry could have returned to the game, but it was out of reach and there was no need. Keep an eye on whether or not Curry is in the starting lineup and whether he is at 100 percent.

Thanks to local gif/freeze frame expert doubleteapot, we have a nice shot of Curry's tweak and it's clear this one was a stroke of bad luck as he stepped on an opponent's ankle, injuring his ankle in a more conventional manner. 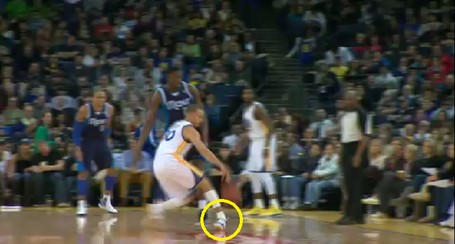 The question now of course is whether he should even play again so soon or if the Warriors should just shut him down, as examined by San Francisco Chronicle reporter Rusty Simmons who also observes how badly the Warriors' offense suffers with Curry out.

The Warriors have done everything possible, investigating Curry's shoes, braces and taping. They've got some of the best ankle and foot specialists in the medical world detailing his rehab and monitoring his progress.

But they've mismanaged the situation in the most important area: None of it matters if Curry doesn't get completely healthy before returning to the court.

So I'll put the Curry question to GSoM: Should Curry play tonight, sit this one out, or just sit out the remainder of the season?