The Enigma that is Javale McGee

Share All sharing options for: The Enigma that is Javale McGee

Freedom's just another word for nothin' left to lose

Nothin' don't mean nothin' hon' if it ain't free, no no

And feelin' good was easy, Lord, when he sang the blues

You know, feelin' good was good enough for me

Good enough for me and my Javale McGee

As always this time of year, the trade winds are swirling, and the Warriors are rumored to be involved in more than their fair share of them. It's no secret that Golden State is (always) on the lookout for a young big man, and one of those young big men rumored to be on the trade market is Javale McGee.

If you watch the game with your eyes, you probably come away thinking this guy has a world of potential with his size, length, and athletic ability. Even though he's in his fourth season, he's actually several months younger than Ekpe Udoh. If you don't watch games with your eyes (opting instead to read transcripts of play-by-play data through a neuro-electro-chemical cybernetic frontal cortex implant as I do), and rely more on numbers and stats, you probably have an entirely different opinion of Javale McGee.

Given that the trade deadline is only a few days away, I just wanted to give a quick statistical take on the other big men from the 2009 draft, to put McGee in some context. The question you want to be asking yourself is should we take a chance on McGee, and if so, how much should we be willing to give up for him (either talent-wise or $$$-wise)?

The following plots are year-by-year RAPM ratings. RAPM is a form of adjusted +/- that is widely acknowledged as a better predictor than plain old adjusted +/- (see my advanced stats primer for more deets). I should mention here that these particular RAPM ratings were calculated by me, and are not the ones from Jeremias Engelmann that are typically cited by people. The reason for this is that his single season ratings actually use the previous season as a prior. While this makes for a better predictor, it doesn't really allow you to see the year-to-year variation so well. Moreover, the prior rating that he assigns to rookies is always -2, so even a very good rookie might still have a negative rating. An example of this is Kyrie Irving, who has a -1.8 multi-year rating, but a -0.4 single season rating (J.E. does provide non-prior-informed ratings for 2012, but not previous seasons).

Once I calculated RAPM for these big men, I found that there were basically three groups of players. These are explained in more detail below.

Group A - Gasol, Love, and Anderson

As we all know, Marc Gasol and Kevin Love are already off the market, and deservedly so. Gasol has steadily improved and is poised to become possibly one of the elite centers in the league over the next few seasons, if he isn't already. I'm a bit less enthusiastic about Kevin Love, but overall, his RAPM rating has improved and is now quite positive. Love is still 23, so he has some room to improve even further, especially on the defensive side of the ball. Aside from statheads, Orlando Magic fans, and fans of Bay Area college basketball, Ryan Anderson is clearly the least well known of the Group A players, but his RAPM ratings are by far the most impressive of the group. His shooting efficiency (59.3% TS) and rebounding (even playing with Howard) are impressive. In fact, when I calculated adjusted rebounding (accounting for teammates and opponents on the court), Anderson was among the league leaders. I'm one of those people who would love to bring back Anderson to the Bay, but it doesn't seem like he's on the Warriors radar, given that they have said they would only trade Ellis if it brought back Howard. Could be a smokescreen, but that's probably wishful thinking on my part. And since we already have one power forward with suspect D, it's unlikely we'd bring in another to play behind him. Anyway, I'm leaving him in Group A until his stats tell me otherwise. 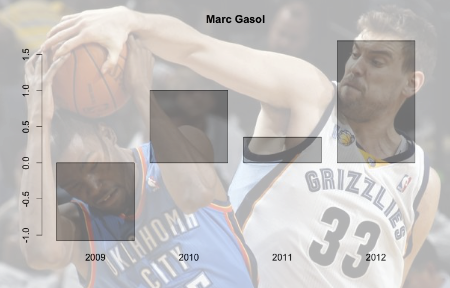 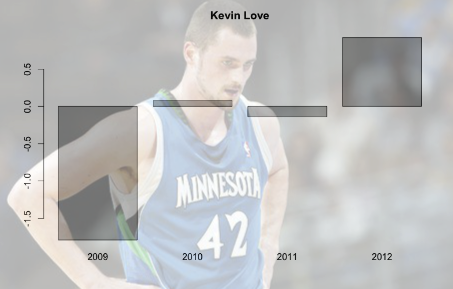 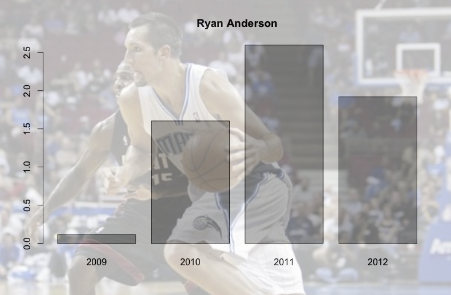 Group B - Hibbert and Jordan

Hibbert is not quite Group A standard with his RAPM just barely topping +0.5 one season, but he appears to be a somewhat-better-than-average center. How much do you pay for a guy like that? Well, I'd surely pay $9M, which is what Andris Biedrins is making. If we use our amnesty on Biedrins, and...oh, wait. Ok, forget that. Well, given that we paid $7M for Kwame and $9M for Andris, Hibbert is likely to get $10-12M on the open market. Hibbert is 25 and given how steady his rating has been, I think what you see here is what you get with him, take that as you will.

DeAndre Jordan is really the player I want you to focus on and remember when I start discussing Javale McGee later in the article. We all know the story now of our DJ debacle, so I won't bother repeating it here. What is interesting about DJ is how much his RAPM rating has improved since his rookie year. The trajectory is tremendous. He started out very negative (like most of the big men here), but it's gone up and up and up every season. (This points out why looking at an "average" rating for young players, especially bigs, might not be the wisest idea.) DJ is still 23, so by the time he tops out, he might actually crack that Group A list. It wouldn't surprise me. Now I can see why the Warriors might have been so keen on signing him. Actually, now I really question why they didn't amnesty Biedrins and throw even more money at DJ. $12M sounds about right to me. Oh, well. Spilt milk and what not. 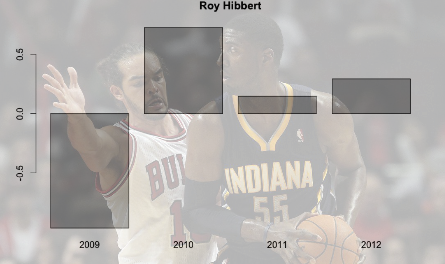 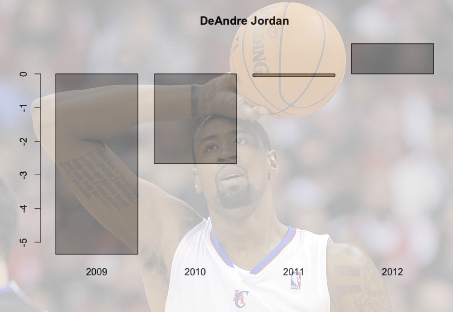 Ugh. Do I really need to talk about these guys? 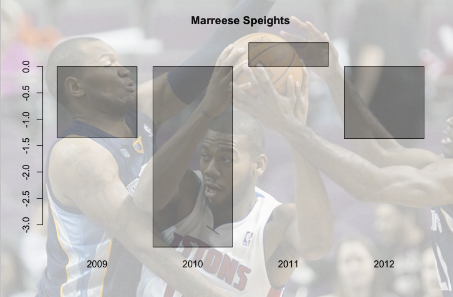 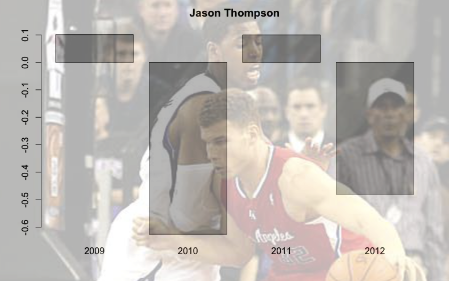 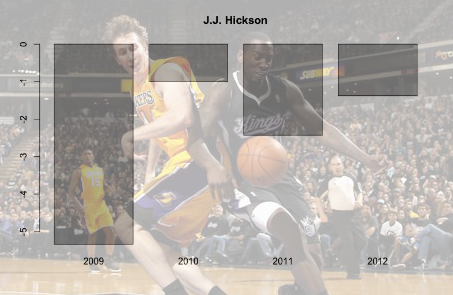 Ok, that brings me to Bobby Javale McGee. What to make of this guy? Remember I said to keep DJ in mind when looking at McGee's rating? Look at his trajectory over the first three seasons. It's essentially the same as DJ. Hugely negative rookie season, with major improvement each subsequent season. That is, until 2012. Wha' happened? How do we interpret this? Is 2012 an outlier? Or was 2011 an outlier? Can we explain away his 2012 rating as the effect of being stuck in a cruddy situation in Washington? If ever there were a case that we need to use both stats and "our eyes" to evaluate a player, Javale McGee is it. Could it be with the proper coaching and attitude, he could be a facsimile of DJ? Does Mark Jackson (along with Michael Malone) have the ability to give him this coaching and instill him with a "good attitude"? I don' t know. I don't know if you can give a player a better attitude. Maybe you can put him in a better situation and hope his attitude improves. Can you teach basketball IQ? My guess is you can't, but DeAndre Jordan has also been criticized for having a low BBIQ, and he appears to be greatly improving despite this (or maybe it's the simply the case that his BBIQ has been underrated).

Bottom line: McGee is 24 years old. To this point, he hasn't shown that he's the kind of center a team can build around, so he's really not deserving of a huge contract. Then again, maybe he's the kind of guy you take a risk on, and hope it works out. It's unfortunate that we don't really have the cap room to take such kinds of risks. If we did, I might advocate such a strategy. But some team out there that is willing and able to take such a risk could benefit from McGee. If we can sign him for $7M (Kwame Brown's contract), I'd have to think hard about doing it. In particular, I know that one GSoMer among you *cough*J-RIDAH*cough* would love to have this guy (and prove me wrong!). 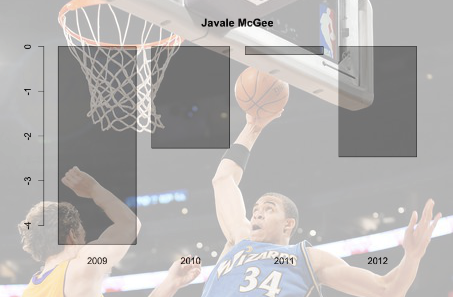