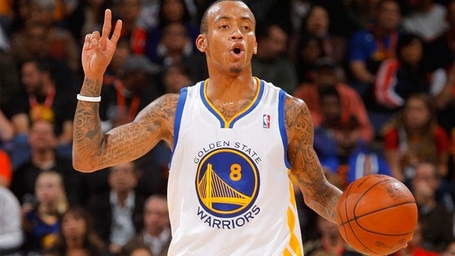 Thanks for all the highlights, Monta Ellis. Play in peace, bro.

The last two times we faced the Kings, our starters sucked, but our bench shined. With the reports of Monta + Udoh + Kwame being traded, I now have no idea what lineup we'll have tonight. If the trade is official, I assume Monta and Udoh will NOT play, so we won't have our best offensive threat and our best defensive threat for tonight, and our bench will fill in for these two, so we won't have a bench threat either. Plus we don't know how many minutes Stephen Curry can play tonight with that ankle.

So basically, we got NOTHING tonight! Enjoy the nothingness!

I wrote the above paragraphs before I read these tweets. Anyway, observations from MT2 and Rusty:

gumbyhighlights: most of my videos now will likely be Biedrins low-lights, LOL!

Onward with the game. Cute little story: The Sacramento Kings starting point guard is currently Isaiah Thomas. Without looking, guess what draft spot he was taken in last summer's 2011 draft, if at all. Make the jump for the answer.

Answer: He was taken #60, dead last! When there was only one draft pick left, and most of the audience had left, and the janitors were ready to clean up the room, Isaiah Thomas got picked by the Kings. And now he's their starting point guard, and apparently playing decently well. Cute story.