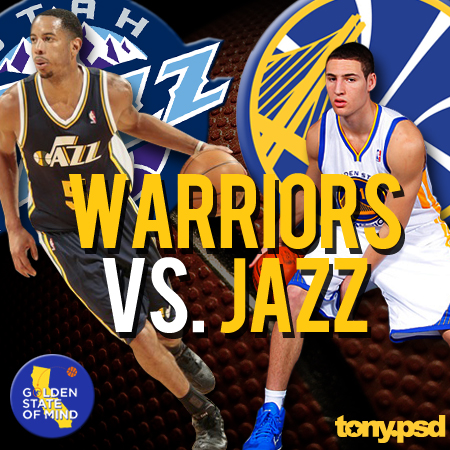 What up! It's been a hectic week for the Golden State Warriors and I gotta say... I'm pooped! Everything from trades, draft pics, to Monta Ellis and Ekpe Udoh leaving on Tuesday than having them come back last night! This has also been our fifth game since last Sunday! Regardless of all the news and hype, it's been a great week in spite of the last 2 losses. Let's close out this week with a little road trip to Salt Lake City where the Utah Jazz are eyeing win number 22. It's anybody's ball game tonight!

- The Jazz will be without Al Jefferson tonight (death of his Grandmother, rest her soul)

- Utah is 2 and a 1/2 games behind the Rockets and Nuggets for the last two playoff spots in the west.

- Warriors gotta start hot and make their shots early on compared to only scoring 12 points last night in the first quarter.

- The Warriors also need to grab more rebounds to keep a lead in their favor.

- Offensively we're doing our thing sharing the ball, there's nothing more exciting than scoring over a hundred points against your opponents and getting the win. Always a tricky task on the road!

- "Dubstitues" can make a big difference tonight keeping the game close or running away with a solid lead.

- Coach Jackson called yesterdays game an "embarrassing effort" for Golden State, lets flip that into an exciting road win. (not a fan of tanking)

- The Warriors CAN win by 7. They just need to put up bigger numbers in rebounding and scoring. "Team Effort"