Game Thread #46: Sacramento Kings at Golden State Warriors — Another Day in the Tank

Share All sharing options for: Game Thread #46: Sacramento Kings at Golden State Warriors — Another Day in the Tank 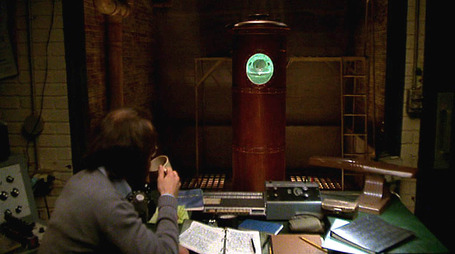 In keeping with IQ of a Warrior's latest tank-related game thread, I'm making a conscious effort to eschew the miltary tank imagery that has proliferated on this site in favor of the traditional tank meant to hold liquid (in this case, the sensory-deprivation tank William Hurt floated in in Ken Russell's 1980 freak-out flick Altered States). Etymologically speaking, this type of tank is somewhat more appropriate, since the contemporary sports usage of "tank" (i.e. to throw in a game) derives, via boxing, from the fact that in the 19th century swimming pools were called "tanks." To lose a boxing match intentionally, you had "to take a dive" — or by extension "tank." Apparently, military tanks were thus called because they resembled tanks meant to hold liquid, but other than this, there's no real linguistic connection between intentionally losing a sporting event and rolling through the desert in a tank.

Just sayin'. Make the jump for the latest tank standings and a prediction.

As you can clearly see, this game carries double tank-value, as a well-executed tank would not only bestow us with a much-needed loss but also saddle the Kings with a miserable win. This is one where, if we truly care about holding onto our pick, we really should bench David Lee and start Jeremy Tyler at point guard.

Sigh. Man, I can't wait for this season to end. A few more days in the upside-down world of this tank and I may start biologically devolving into a caveman and feeling compelled to gnaw on a bloody gazelle. Grrrr... Let's go Kings!!!