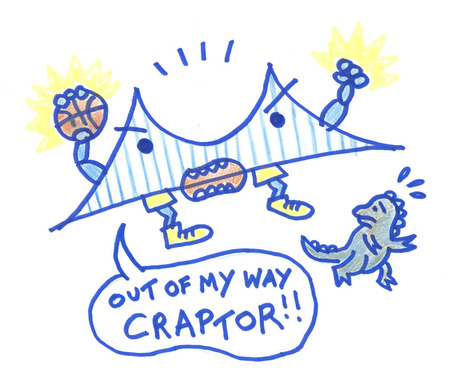 Fear the Bridge. Kind of.

Who needs Celtics/Knicks or Lakers/Heat when you have Warriors/Raptors? The Warriors' continued quest to bequeath the Utah Jazz the highest draft pick possible moves to Canada this afternoon. Recently the Raptors have been one of the few NBA teams against whom the Warriors have been able to count on a win — their five-game winning streak v. them is the longest v. any opponent. But the likely absence of Stephen Curry (currently sporting a gaudy career scoring average v. TOR of 30.3 ppg) makes even a lowly opponent like the Raptors somewhat daunting. The combo of the Warriors' moribund offense sans Steph and the Raptors' improved D under Dwayne Casey could make this one a slog. Make the jump for some perdickshuns.