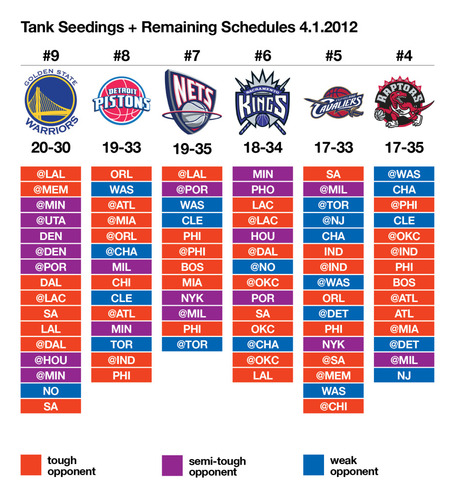 As some here may know, I'm a Celtics and Warriors fan (born into the green, switched trains to the Warriors in the late Run TMC era), so if any game should really test the mettle of my FanTanking, a showdown with the doubly-dreaded Lakers should be it. Meh, who am I kidding? It's no contest. Look at that chart above. In the wake of an inspiring clutch tank against the Nets on Friday, we're now tantalizingly close to the #4 seed. Go Lakers!!!

I'm not even that excited about the pickings in this year's draft at the #7 or #6 pick, but I am more than a bit excited about Anthony Davis, who increasingly looks to me like the second coming of Kevin Garnett. At our current #9 slot, our chances of landing Davis are a paltry 1.7%. If we can sneak all the way down the ladder on the chart above, that morphs to a much more imaginable 11.9%. With each rung down the ladder, we gain a percent or two better chance at landing a potential franchise big man in one fell swoop. As Han Solo said, IIRC, "tell me the odds!" To me, those one or two percentage points are more than worth the minor discomfort of watching Kobe and Co. abuse my team in front of a bunch of distracted beautiful people at Staples.

Of course, if your fear and loathing of the Lakers outstrips your desire for a more realistic shot at Davis or Kidd-Gilchrist (and/or a guarantee of keeping our #5-7 pick) feel free to root for our boys to shoot the tank down in flames. Different strokes.

Note on the graphic: in the interests of simplicity, I defined "tough" as over a .550 winning percentage, "weak" as below .450, and "semi-tough" as anything in between. Naturally, there are some important nuances within those categories, which are then further nuanced by injuries, home v. away games, the fact that some "tough" teams may be resting their starters, etc. But I thought the "electoral" simplicity of blue-red-purple made for a nice quick-and-dirty read. Broadly, I think the general reddishness of the Warriors' schedule suggests that they have the toughest row to hoe, but I was a little surprised to find that all our competitors have a worrisome amount of red left. Looks like it's going to take some very diligent tanking to end up as the #6 or 7 seed. I wouldn't bet even money that we'll be able to pull it off.

Simple question: who are you rooting for in tonight's game?