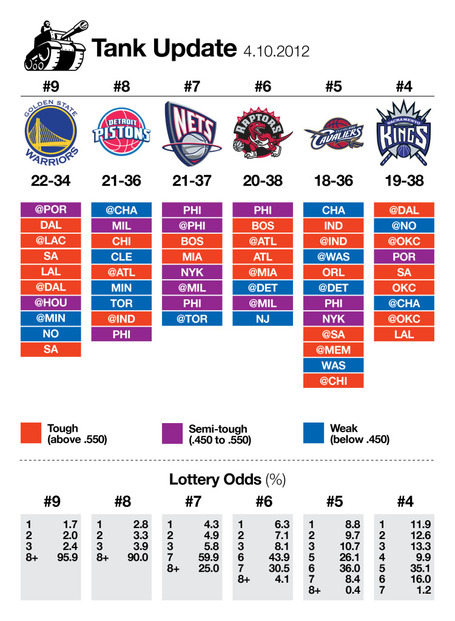 Read it and weep. The Pistons still look like a solid candidate to pass us, but the tanks of the other four contenders are looking increasingly indestructible. I mean, if the Warriors can play out their remaining ten games like they played last night, their tank could make some headway, but in the context of their reasonably unterrible play the last couple of weeks, I really don't expect that to happen. Nor, I should add, would I really want it to happen. Last night's debacle didn't make me feel good at all. FanTanking is a delicate art which typically entails pulling for a margin of loss that is neither narrow enough to make you sweat too much (or worse, pull out a pointless win) nor wide enough to crush your soul. Here's hoping for ten such games to close the season. LGW: HFL!*

Philadelphia at New Jersey (4:00 pm PST). The Nets' home-court advantage and Sixers' recent stretch of horrific basketball is semi-encouraging, but with the Sixers now clawing for their playoff lives and both Geralds (Wallace and Green) possibly out, this could be a tough slog for the Nyets. Gotta root for Deron to be a world-beater and old friend Morrow to rain chocolate threes all day long.

Sacramento at Dallas (5:30 pm PST). Notwithstanding the inspired play of Isaiah Thomas and occasionally inspired play of DeMarcus Cousins, the Kings' tank keeps chugging away. Jimmer Fredette is looking like a true Tank Commander. We should ask to borrow him on nights when the Kings aren't playing.