Warriors Game Day Links #60: Golden State Warriors 99 vs San Antonio Spurs 120 - It was so quiet, you could hear a tank drop

Share All sharing options for: Warriors Game Day Links #60: Golden State Warriors 99 vs San Antonio Spurs 120 - It was so quiet, you could hear a tank drop

- Previews of the game.
Matt Steinmetz: Spurs-Warriors: What to watch for 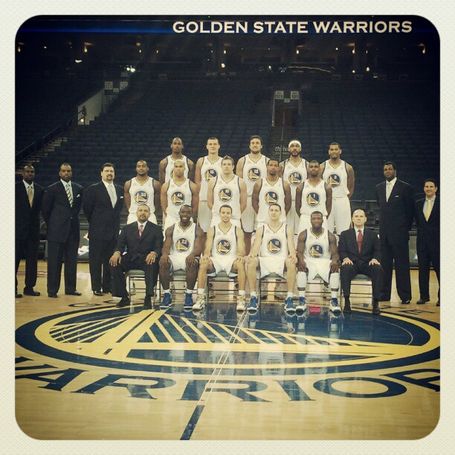 - How about some Matt Steinmetz rankings to fill the void?
Matt Steinmetz: Rankings: Lost season for Warriors, Kings

Mark Jackson at the podium.

Mark Jackson
On Nate Robinson And Klay Thompson:
"In the second half they really battled, competed. Offensively, those guys had big nights. You look at Klay [Thompson] with eight rebounds. He defended and was efficient. Nate [Robinson] gave us a burst of energy and you look at the 30 points - what I liked better was that he tried to spark us defensively. Picked up whoever it was at the point and tried to extend and battle. We understand where we are right now; we're shorthanded. The energy and the effort in the second half were acceptable. I can tolerate the second half; the first half...was very disappointing."

On The San Antonio Spurs:
"They are extremely well coached - which is obvious. They have one of the best to ever do it. They have three guys that will one day be in the Hall of Fame. They are very efficient and they make you pay when you make mistakes. They are an outstanding basketball team. They will be a tough out come playoff time because of those things."

On Jeremy Tyler:
"I thought he was, for the first time in a long time, he tried to catch and finish at the rim. He attacked. I believe this was his first ever double-double...but he showed some signs and he battled. He was active on the boards and also active in trying to challenge shots. Certainly a night to build on."

Klay Thompson
On Taking Positives Out Of This Game:
"Not really, it's like our fifth game giving up a hundred. Only thing that you can take out of it is that us young guys, as rookies, we got a lot of experience with a game like that. Chris Wright came in and played amazing and just lifted up [our] energy. Jeremy [Tyler] played hard tonight, the same with Charles [Jenkins]. All of us rookies can take a lot out of this."

On Four Rookies Starting Tonight's Game:
"[No one's] seen that in a long time from the Warriors. It was unique and we were trying to make the most of it and trying to get better every game, try to get some wins here and end the season strong."

On Modeling His Game After Spurs Guard Manu Ginobli:
"No, I just like to play my own game and do what I can because I know that I can be just as good, if not better than, Manu Ginobili. He's a great player though."

- No interesting notes to add tonight.

- Lakers fans go to Staples Centers to be seen. Our fans go to Oracle to be heard rooting for a free Jamba juice. At least we won't have to listen to that spot anymore.