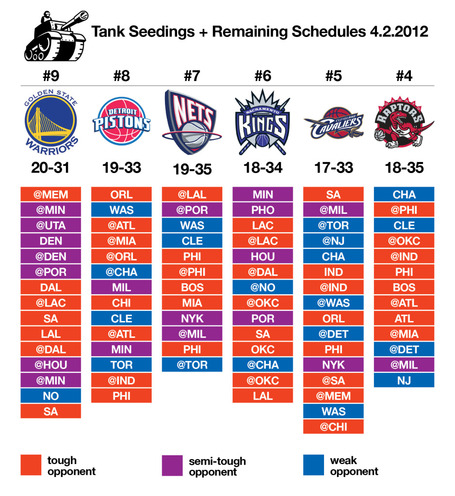 Between IQ of a Warrior's invaluable "game day links" threads, general post trade-deadline malaise, and the hectic schedules of the Golden State of Mind staff, the tradition of the GSoM Recap seems to have fallen somewhat by the wayside these days, but I thought I'd resurrect it here if only to update the Tank Chart from the game thread. It's looking prettier than ever! Jump for more.

The game went just as the majority of us — ±70%, if the poll is to be believed — had hoped: the Warriors fought hard and made the Lakers sweat, but were ultimately able to add a much needed L to the ledger in an ever-tighening tank battle. The outcome basically swung on a late wide-open three klanked by Klay Thompson (42.1% 3FG on the season) and a couple of made threes by Kobe and Metta World Peace (29.1% and 28.1% from three this season, respectively). That's how close we came to severely damaging the tank offensive. The Warriors' loss, together with the Raptors' defeat over the Wizards, leaves a scant margin of three games separating the #9 seed from the #4. Just to recap, for anyone who hasn't been assiduously following the tracks of the tank over the past few weeks:

Chances of the Warriors retaining their pick: 100%

Chances of retaining the pick: 6.1%

That's what's at stake over the next 3+ weeks. I think the #4 spot is pretty much a pipe dream, and I'm not even particularly optimistic about our chances of moving down the two rungs required to gain a 75% shot at keeping our pick. Still, the race is tight enough now that I'm riveted. Sometimes as a fan all you really want is something to root for. As one GSoMer recently pointed out, after the rancor and bitterness of the late Monta Ellis era, it's nice to have something that brings Warriors Nation together. The 2012 Tank is a warm, fuzzy, feel-good tank.

Warrior Wonder goes to David Lee, despite shooting 10-25 from the floor, for a solid 27 pts / 6 rebound / 7 assist line, and, in a broader sense, for generally busting his butt every night, and showing glimpses of how effective he might be next season playing alongside a 7'0" 260 lb. defensive monster like Bogut.

Tank Commander goes to Brandon Rush for missing 5 of his 6 shots, getting roofed on a couple of dunk attempts, and putting up a tank-tastic plus-minus of -15 in his 20 minutes. Well done, Commander Rush!