- Compared to last season, the Warriors have shown some improvement in winning on the road.
Rusty Simmons: Road steps key on Warriors' route to contention

- Previews of the game.
Matt Steinmetz: Warriors-Grizzlies: What to watch for

Mark Jackson in the hallway.

On The Grizzlies:
"They're a veteran basketball team that turned up the volume and turned up the heat. Each situation we didn't execute. We have to get better and learn from it, but clearly, they have another level to go to, and we don't know how to respond yet."

On Nate Robinson:
"Aggressive. He gave us a scoring punch and played very well, but obviously, he had something to do with them coming back. It could have been better."

David Lee
On The Grizzlies:
"They're a good team. They're a playoff team. Their depth is their bench tonight and that's who shot the best percentage and everything for them. At some point in the game, they turned up their defensive pressure, and we didn't react well to it. We had some turnovers. Give them credit. They hit shots down the stretch."

“They’re going to be a team that’s going to be a playoff contender in the West. They showed it last night by beating Oklahoma City on the road. Tonight was a game we should have won, and we didn’t execute down the stretch.”

On The Impact Of Zach Randolph:
"He's still getting back going. He's a guy that's a rhythm player and as he gets his rhythm back on his jump shot and his low-post, he's going to be better. Zach is an All-Star caliber player, and you hate to ever see anybody get hurt. I wish he would have come back next game, but I'm happy that he's back healthy."

Nate Robinson
On The Warriors Struggles Against The Grizzlies:
"They've been kicking our (butt) period, point-blank. There's nothing much to put into it. They've been outplaying us in every aspect of the game. We've just got to get better and get ready for the next one."

Richard Jefferson
On The Loss:
"I had a turnover and different guys made mistakes. They (Grizzlies) shot the ball well in the fourth quarter. We have to play better."

On The Warriors Struggles Against The Grizzlies:
"We have a young team, and we're learning and growing. It's tough. We have to be patient with each other. We've been within seven or eight points every night (against the Grizzlies) and guys are playing hard. We're just not finishing the job."

On Each Team Responding To Their Recent Additions:
"They're still trying to get their rhythm just like anybody, including myself. I'm trying to get my rhythm out here with this team and trying to find my way. Zach (Randolph) is doing the same thing right now. It's tough whenever you're missing a long stretch of the season, and you're coming back with a playoff team. They're not just going to put you in there and throw you the ball. That's going to take a little bit of time to acclimate to the offense and the rhythm and get his touch back."

- Mickell Gladness is still away from the team. I think they said during the pregame that he'll be back with the team tomorrow.

- Keep that tank rolling by pushing the 6 game losing streak to 7 tomorrow, up in Minnesota.

A sign Tim Roye saw in Memphis at the lunch counter. 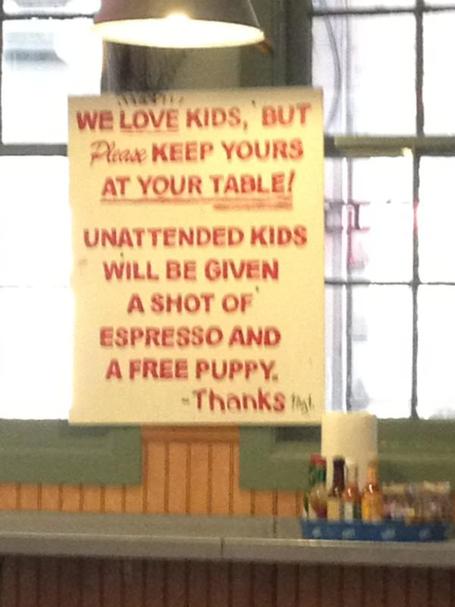